The beauty of the Italian Maiolica and the Renaissance Lustre Pottery have been the main topics of the lecture held by professor Justin Raccanello and hosted by the De Young Museum in San Francisco a few weeks ago. The story of these handcrafted ceramics goes back to the Renaissance but only in the 19th century Italian factories started displaying their products during global exhibitions. At that time, the lustre technique was a well kept secret, probably known by only one or two people in the workshop and this kind of decoration began to lose popularity around the middle of the century, due to a lack of demand and the development of more industrialised production in centres like Faenza.
The talk was also an attempt to collate the recent research into the history of the rediscovery of the lustre technique in the mid nineteenth century by potters from Pesaro, Gubbio and the great Ginori porcelain factory in Florence. Due to the rising popularity and value of Renaissance maiolica, beginning with the Great Exhibition in London in 1851, unscrupulous dealers attempted to sell the newly produced lustre pieces to museums and collectors as genuine antiques.
Where does the passion for Italian art come from?
My father was born in Venice and came to London in the early sixties. He was an antique dealer and growing up I was surrounded by beautiful objects of all styles and periods from all over Italy. I remember conversations with dealers from Florence, Bologna, Rome, Naples, Sicily and many other places.

How did the interest for Italian ceramics generate?
I have always felt that the history of civilization can be traced through the ceramic objects left behind. Once earth has been fired it will survive unless broken or destroyed unlike almost any other material such as textiles, wood or leather. This is also true of metalwork but ceramics, after the invention of glazed wares, bring the original colours of the period to us in an unchanged state. This is particularly true of Italian maiolica (tin-glazed earthenware) whose polychrome decoration is a true representation of the brightness and vivacity of the Renaissance. There are two great traditions in Italian pottery, the picture-like dishes, which were primarily made for decoration and the apothecary ware, made to supply pharmacies with durable, colourful vases to contain the necessary ingredients and medicines. There is a superb surviving pharmacy with nearly 350 vases produced in 1579 and 1580 in a small town called Roccavaldina, near Messina in Sicily.
Which feature do you think is unique to Maiolica?
The pictorial decoration on the 16th century plates made in Italy during the Renaissance, so-called ‘istoriato’ ware, is the only European ceramic production that does not attempt to imitate Chinese or Oriental porcelain. Initially the technology only allowed for blue or green decoration, but once the discovery was made, the decorative impulses of the Italian potters were released and beautiful depictions of erudite mythological and religious scenes taken from the Old and New Testament were produced. Once known as Raphaelware after the famous artist from Urbino, which was the most renowned centre of production of maiolica, these dishes are still as fresh and brightly coloured today as when they were fired almost five hundred years ago. 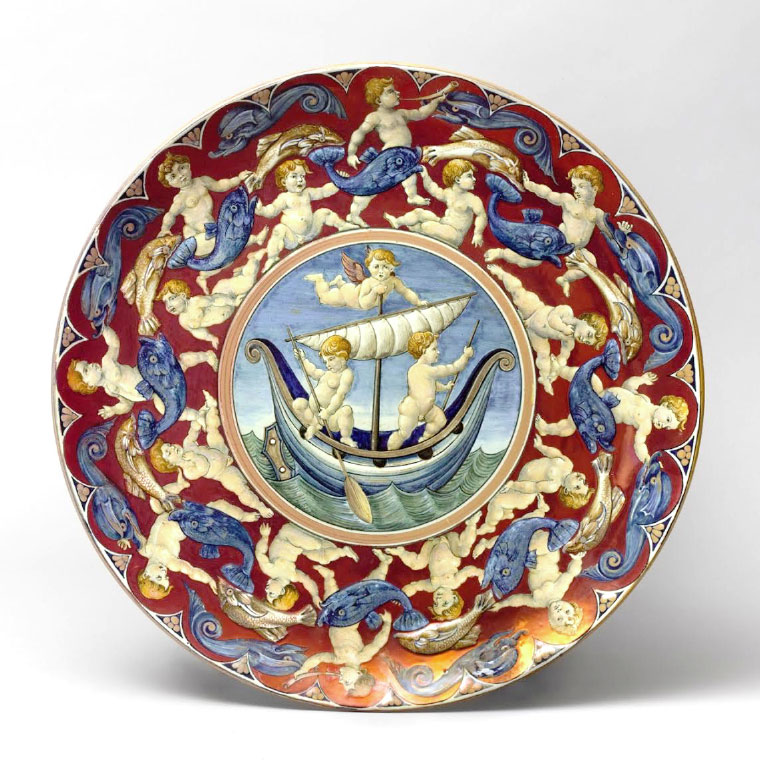 Putti and Fish Dish. Designed by William De Morgan and fired in the Cantagalli workshop, Florence in 1901.

Last month you had a lecture on Italian Renaissance Lustre Pottery. Could you share something with our readers?
The term lustre glazing refers to the process of firing ceramics with a metallic oxide glaze in a reducing (oxygen free) kiln whereby the oxygen is drawn out of the glaze, leaving a thin layer of iridescent metal on the surface of the pottery. Originally discovered by Islamic potters in Iraq, the process reached its high point in the beautiful wares produced in Spain in the fifteenth century. Some time in the second half of the 15th century, the secret of lustre glazing was introduced into Italy, firstly at Deruta, a small town on the Tiber and afterwards in Gubbio.
Although the technique was used elsewhere, most notably at Cafaggiolo near Florence, these two towns established themselves as the major suppliers of this sumptuous new product. Deruta’s trade links with Rome and Gubbio’s position as second city in the Duchy of Urbino ensured access to the richest and most erudite patrons. Dishes were given as wedding gifts, so-called ‘coppe amatorie’, or used as conversation pieces at important banquets. The lustre glaze, added to the pictorial decoration of the ‘istoriato’ dishes, made them seem even more precious, as if they were metalwork or jewellery.
As an expert, what does mostly impress people while learning about Maiolica?
Everyone is always struck by the brightness of the colours. We are more familiar with looking at Renaissance paintings and we have an idea that the 16th century was a dull, dark place, but nothing could be further from the truth. When you consider that originally these paintings would have been as fresh and colourful as the maiolica dishes, which being fired can never fade or lose their vitality, then you can get a better idea of how everything looked at that time.
Which kind of interest did you find among the American audience?
The audience was a great mix of people, some of whom knew very little about the subject and others who are collectors with great knowledge and interest. I was very struck by the number and intensity of the questions at the end. I hope I managed to convert a few people to appreciate the beauty of Italian maiolica.
Receive more stories like this in your inbox