I have always had a secret fantasy to dress like Eleonora de’ Medici. This desire is played out in a new book I have written called “Dreaming Sophia”. Have you seen the painting by Agnolo di Cosimo Bronzino of Eleonora? It is housed in the Uffizi Gallery in Florence and was painted around 1545. The woman featured in the portrait is the wife of Cosimo I de Medici, the Grand Duke of Tuscany. She was the daughter of a Spanish noble man, Don Pedro de Toledo, Marquis of Francavilla, the Viceroy of Naples and the senior officer to Emperor Charles V.

In this charming portrait by Bronzino, Eleonora is regally seated, with her small child Giovani next to her side. She gazes at the viewer, secure in her role as a wife, a mother, a mistress of a large house, a regent and a business woman, as well as a contributor to the Medici dynasty. She is depicted as the ideal woman of the Renaissance. The intense blue of the background of the picture, further emphasizes the stateliness of the woman and enhances the astonishing beauty of Eleonora’s dress which visually overwhelms the figures in the picture.

As court painter to the Medici in Florence, Bronzino produced scores of portraits. His Medici patrons highly admired his stylized figures with their long lines and elegant poses. In this particular portrait, the artist pays particular attention to Eleonora’s beautiful brocade gown, rendering it with an astonishingly talented artistic hand. The clarity of style is photorealistic in style. The artist cleverly renders the dimensionality of the brocade silk fabric with its loops of gold, silver and black arabesque designs. The motif is that of pomegranates, which refer to Eleonora’s abundant fertility and role as a mother. (In total she produced eleven children!) Just by gazing at the painting one can feel the weight of the fabric and the heft of the pearls and gold ruby necklace that grace the duchesses’ throat.

Eleonora de Medici was a patron of the arts and a lover of fine things. In fact, it is said Eleonora kept ten gold and silver weavers in her employ to work on her court attire! Although rumored to be a gambler, she was also a devoted wife and mother and increased the Medici holdings through her wise investments. Testimony to this can be seen in the Pitti Palace which she purchased and refurbished along with the Boboli Gardens, that grace the palaces grounds.

Apparently, I am not the only one who fantasizes about dressing up like Eleonora! A few years ago Fausto Fornasari, a costume-maker based near Mantua set about recreating Eleonora’s gown that she wears in the Bronzino painting. It took Mr. Fornasari’s King Studio three years to reconstruct the dress, and the result is a faithful replication, down to the pearl-studded gold netting around the shoulders and the decorated sleeves.

The next time you are in Florence, you can also find a lovely little shop called Tharros Bijous where Carlo Amato, a Florentine jeweler, creates dazzling museum reproductions of jewelry found in Renaissance masterpieces. Recently I had the pleasure of meeting Signor Amato and admired first hand his reproduction of Eleonora’s beautiful pearl necklace that she wears in Bronzino’s painting.

Just imagine that! Today we can dress like royalty and adorn ourselves with jewels, just as if we too had stepped out of a Renaissance painting!

Melissa Muldoon writes the dual language blog StudentessaMatta.com in Italian and English. She also produces Matta Youtube videos in Italian and Podcasts and co-leads Italian Language Immersion programs in Lucca and Arezzo as well as organizes Homestays with Italian teachers improve language skills and learn more about Italian customs and culture.
Receive more stories like this in your inbox 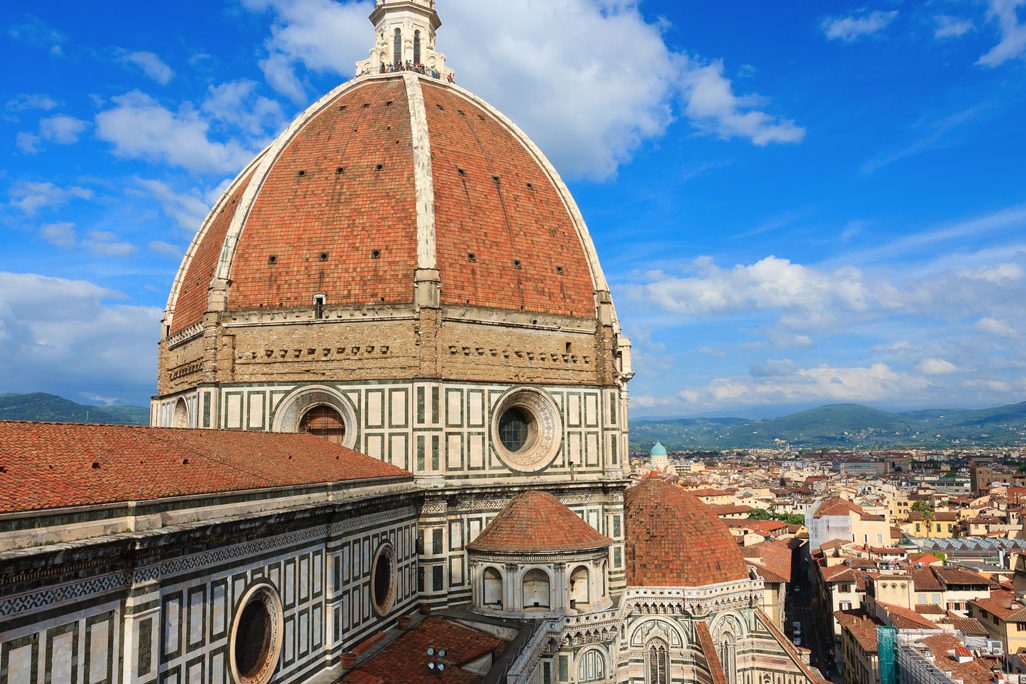 All Around Italy
On top of the world, on top of Florence’s Duomo! 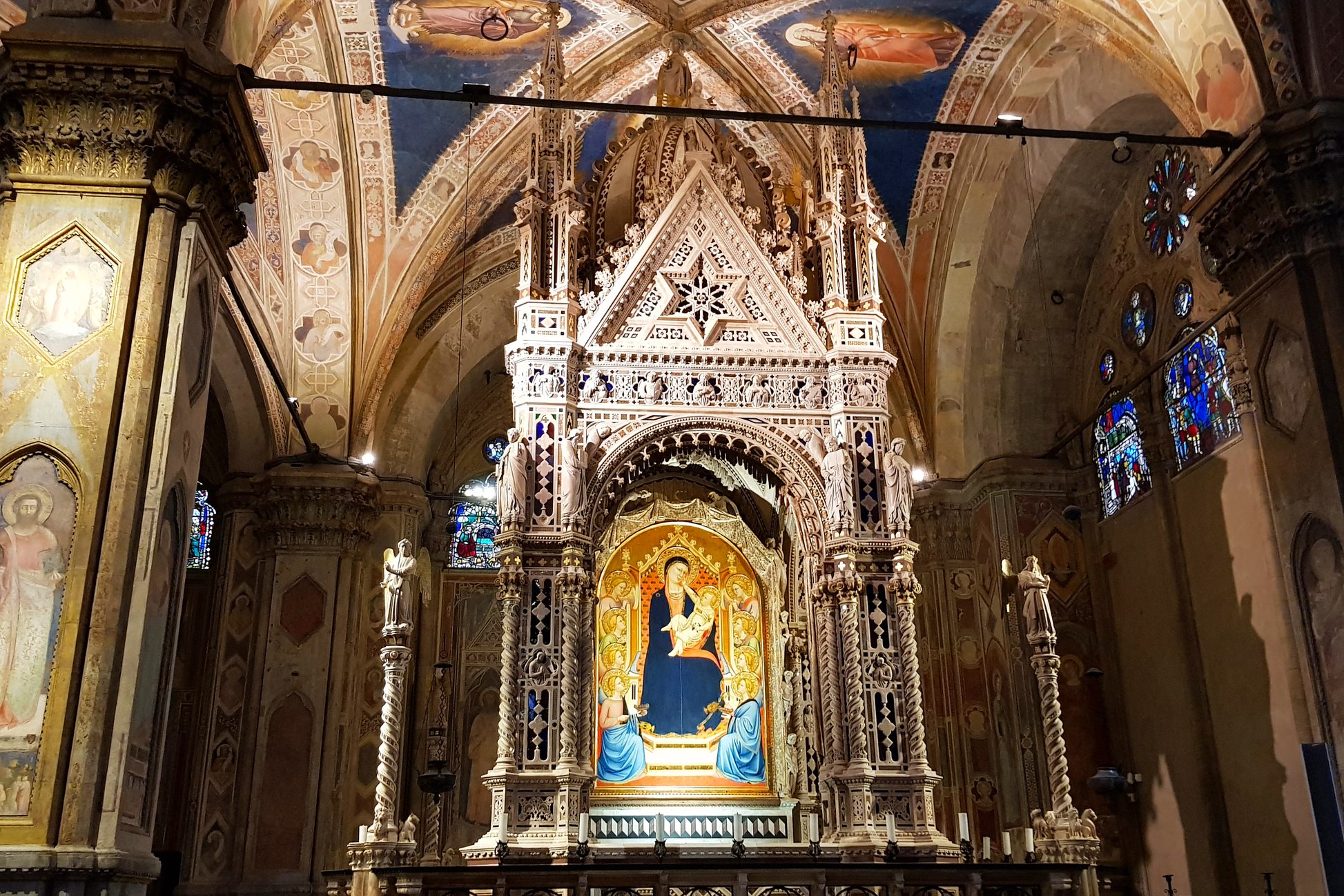 Culture
Orsanmichele, a trip into the past 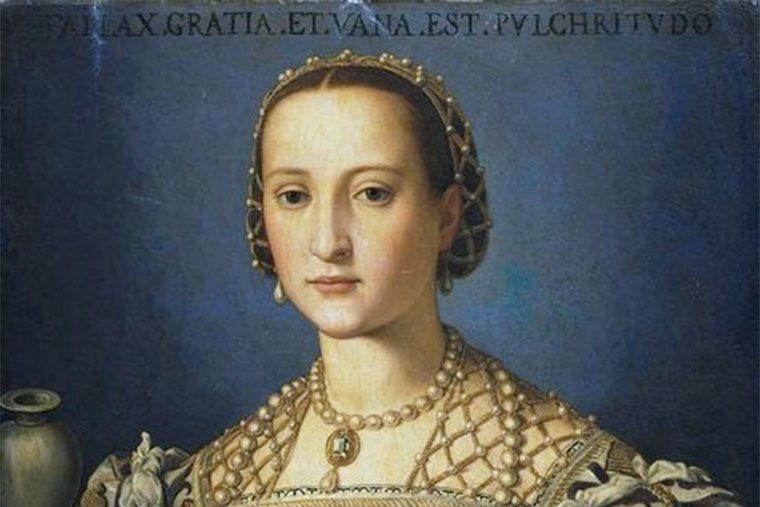