On August 4, 2016, the San Francisco Bay Area welcomed Dr. Roberto Masnata, son of Pino Masnata, at the San Francisco Italian Cultural Institute. Dr. Masnata’s presentation was on Futurist art and took place on the 115th anniversary of Pino’s birth, August 4, 1901, in Stradella, Lombardy, Italy. Roberto spoke about his father’s dual career as a surgeon and Futurist poet-dramatist.
Roberto Masnata grew up in a rarefied atmosphere of art and science and is currently a doctor in Stradella, Italy, specializing in dentistry and dental implants. His father, Giuseppe (Pino) Masnata (1901-1968) navigated careers as surgeon, poet, dramatist and soldier. A prolific and original artist, Pino served for many years as secretary and physician to F. T. Marinetti. In 1933 the Second Futurist Congress named him National Poet Champion of the Futurist movement. He is best known as co-author with Marinetti of the 1933 Futurist Radio Manifesto. 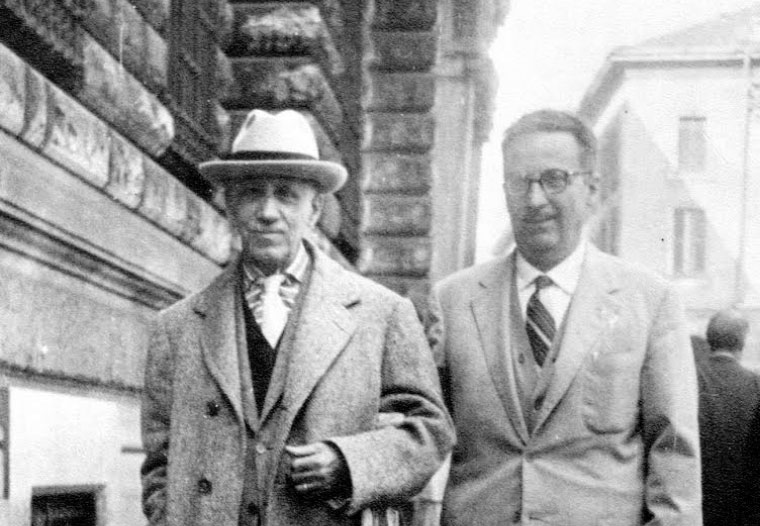 The Futurist Radio Manifesto first appeared in Torino’s daily paper Gazzetta del Popolo on  September 22, 1933. Scholars explain that the Manifesto developed a mystical aura around it due to its cryptic phrases and poetic juxtapositions. Suggestions that listeners could be seduced by vibrations from a diamond or a flower had referents in the gramophone industry, where the diamond needle traduced vibrations from a solid object into sound waves; and in botanical experiments that demonstrated the generation of electricity by means of cell oscillation in plants. Masnata’s most original contribution to Futurist radio art describes a universe made only of trapped and shifting waves. Radio, the science of radiating waves, in his opinion, was the foundation for all art, including the art of surfaces: architecture, sculpture, painting, ceramics, and textiles. The 1933 Radio Manifesto remains among the most enduring of all the manifestos of the Futurist movement, resonant with text, new music, and sound art in a digital age.
Masnata stressed the importance of original form and structure over content. He wrote a number of radio sintesi (brief, condensed works) and radio dramas in the 1930s and 40s including the fifteen-minute Tum tum ninna nanna, renamed Il cuore di Wanda (Wanda’s heart) for broadcast on December 20, 1931. This collaboration with composer Carmine Guarino secured Masnata’s reputation as a radio artist. It was billed as the first Italian opera written specifically for radio.
Launched in 1909 with a front-page manifesto by F. T. Marinetti, Italian Futurism energized the art of its time with a muscular new aesthetic built on speed, electricity, machines, simultaneity, and the intensification of the senses.
At the Italian Cultural Institute event, Roberto included a remarkable and stunning PowerPoint presentation illustrating the creative genius of Masnata. After the war Masnata began to write poems without words. Nouns form the core of these image poems, which are designed as austerely as possible and without releasing pen from paper. The continuous line designs and ties one noun to another without interruption to create its message, often leaving one to intuit by the movement of the line the verbs, adjectives and other elements of speech.  Masnata would say: “Realizing that with the use of words, I was a slave to linguistic structure, I sought to free myself by creating a poem without words, i.e., a graphic poem.”
L’Italo-Americano asked Pino’s son, Roberto, what he felt was his father’s most important legacy. “As a child I have to say that the greatest legacy left to me by my Father is the human and moral values of honesty, faithfulness, dependability and love for the homeland and family, values ​​which today are disappearing, at least in Italy, but which, I believe, are still the basis for a good life.
“From the artistic point of view I find that some of my Dad’s insights have been very innovative and important. Creating poems without language, so they can be read and interpreted by everyone from anywhere in the world, was an ambitious project, but very original and futuristic!
When asked if Futurism is appreciated in present day Italy he responded: “It’s been just a few years that Futurism is beginning to be appreciated in Italy; too many connections with Fascism and the Second World War. Too many people have resentments and therefore it takes time to re-evaluate artists of that period. The painters are perhaps a better position than writers. Painting is more immediate and offers more spontaneous emotions and is more understandable. Perhaps for this reason that we all know and appreciate artists like Balla, Boccioni, Carra, Severini.
“My dad’s idea was to represent and express the thoughts of the characters on stage, no particular chronological order, to “free rein”, putting reality and fantasy in the same plane, past and present, is simply amazing and fantastic.  Tell what goes through the head of the main characters, who may have been affected by a disaster, a betrayal, a great loss! Fantastic! And this was done almost 100 years ago.”
Receive more stories like this in your inbox