1908 is a crucial year in L.A.’s Italian-American history for at least two reasons.

First of all, in that year L’Italo-Americano was founded by the cultured Florentine, Gabriello Spini.

Secondly, in that same 1908, it was built the Italian Hall in Downtown L.A., as a focal point of gathering within the then flowering “Little Italy.”

Beside reading about the history of the numerous surges of Italian immigrants in Southern California – on our newspaper as well as on several specialized bibliography – since the inauguration of the Italian American Museum of Los Angeles (IAMLA) on August 14th at the newly restored Italian Hall, it’s finally possible to learn about the Italian-Americans’ achievements and downfalls across the decades, through its interactive and multimedia exhibits. 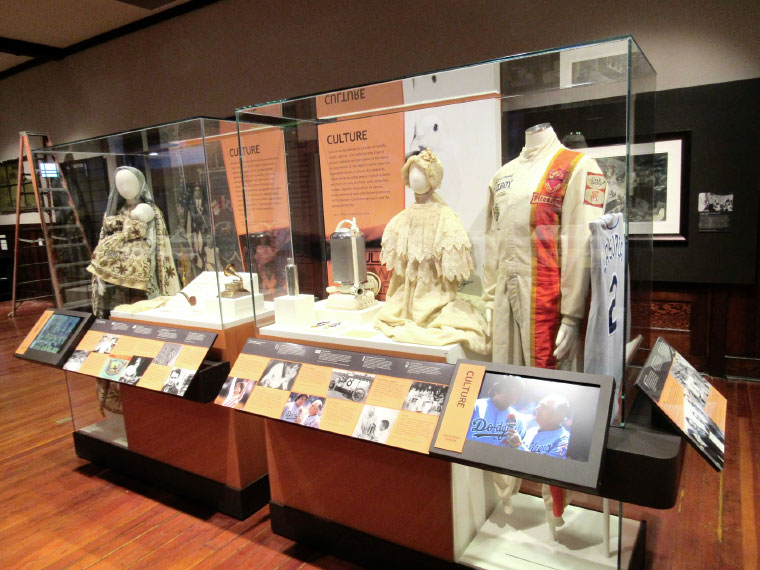 Adjacent to the display cases, there are state-of-the-art video installations, featuring hundreds of rare and never-before-seen images and historical documents.

If you are unable to physically reach IAMLA, its permanent exhibition content is also showcased online via Google Cultural Institute.

Dear readers, I hope you’ll forgive a brief digression, just to say that a precious copy of L’Italo-Americano – dating back to early 1900’s – is stored inside one of the display cases.

We have to thank historian, author, educator, but above all IAMLA’s Executive Director, Marianna Gatto for having tirelessly spearheaded a long and exhausting advocacy campaign to bring the Italian Hall back to its original splendor.

Now that her brainchild is fully operational, we endorse her hopes to build a stronger Italian-American community in L.A., around a common past made of radiant successes in all fields, in spite of deeply rooted prejudice and discrimination against our ancestors.

What is your cultural background? How was your upbringing in an Italian-American household?

My family from my father’s side emigrated from Lago, in the province of Cosenza, Calabria, and Lucca Sicula – province of Agrigento, Sicily – to the US in the late nineteenth/early twentieth century.

Growing up, we did not speak Italian at home, only some dialect at times. My father, Joseph Gatto, and grandfather were largely responsible for teaching me Italian and Italian American values, such as the importance of family and hard work, a love for good food, and a respect for history and community elders.

The struggles of my grandparents, and the stories I heard from so many others, inspired my commitment to this project, to unearthing and preserving this history. 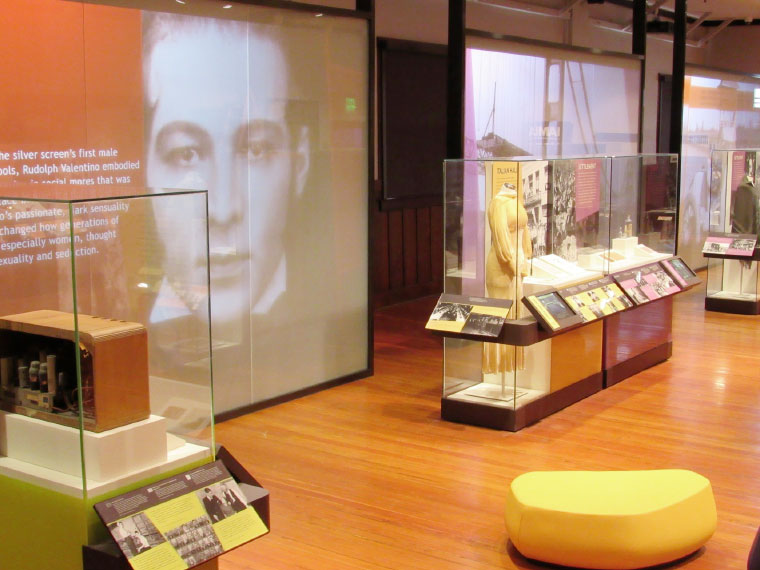 Your book, Los Angeles’s Little Italy, came out in 2009. What are the major takeaways from it?

The idea behind my book is to provide readers with the background information about the Italian-American presence in Los Angeles.

Most people thinks of Italian immigration in the city as a phenomenon of 1940s up until the ‘60s. Truth is that the first settlers came in California around 1820s, when the state was still under Mexican control.

My main focus is to communicate the invaluable contributions by Italian-Americans to this region. 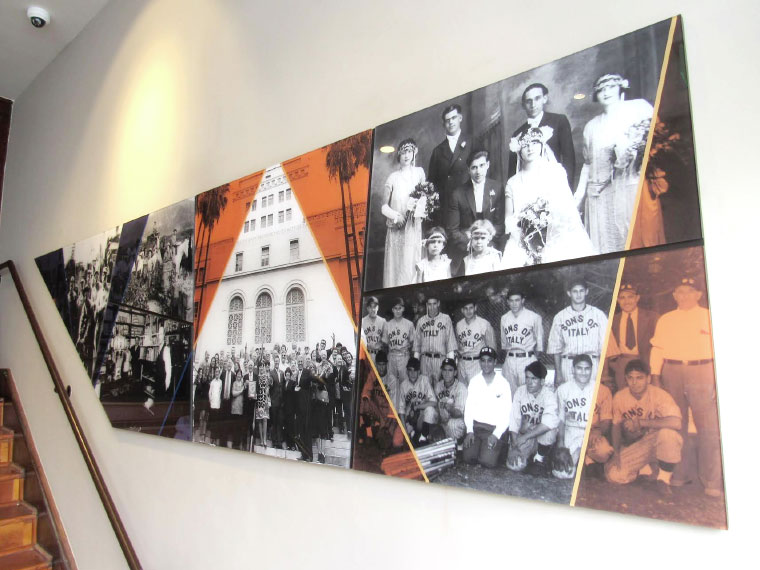 This newly inaugurated permanent exhibition is hosted in historic building itself for the Italian-American community, the Italian Hall. What is its history? In what way was your advocacy campaign to restore the building challenging?

The Italian Hall was built in 1908, in what was then the core of Little Italy, that later on expanded to incorporate the neighborhood equivalent to today’s Chinatown (including Saint Peter’s church).

Other two strongholds of the Italian-American community, documented in our exhibition, are Lincoln Heights and San Pedro.

The Italian Hall was used as a gathering place, until in the early 1950s the State of California purchased the building, together with other 22 historical edifices, with the aim of preserving them.

Since the State never had the money to maintain the buildings, most of them got in disrepair, including the Italian Hall.

Between 1980s and ‘90s, the latter seemed destined to be converted in a commercial space. That would have erased the Italian-American history connected with it.

A large group of Italian-Americans began to advocate it and raise funds for this symbolic place.

There have been a series of setbacks, like the water leak in 2003 that caused a lot of damage to the building.

In 2005, as I was working as an historian for the city of L.A., I collaborated with the Foundation and the other community leaders to advocate the cause and raise extra funds to repair the Italian Hall.

Ultimately, we managed to raise the necessary money to restore the building to its original splendor.

Could you spend a few words about the employment of the Italian Hall’s first floor as a speakeasy during Prohibition?

When the Italian Hall was constructed in 1908, a large, elegant saloon operated by the Paggi and Issoglio families was located on the building’s first floor. The prohibition of alcohol shuttered the saloon.

From what we can discern, a speakeasy, or illicit bar, opened on the second floor of the Italian Hall following the law’s passage with different operators. Evidence of this was uncovered during the building’s restoration. The original speakeasy door remains and has been restored.

How did you come up with the concept behind the annual event, Taste of Italy, held on October 1st?

In 2009, the Historic Italian Hall Foundation (located behind the museum) and I were discussing about an event for our members, offering a selection of wine varieties and cheese.

Soon, we thought to invite some restaurants and I exclaimed: “That sounds like a taste of Italy.”

An initiative, originally conceived as a fundraiser reserved to our Italian-American members, has grown into an annual gathering of over 2000 people, from all walks of life.

The event has an important educational mission, not only about the food and wine production in California as well as in Italy itself, but also about the collection of our museum and the rich history of our community.

To you, which are the IAMLA’s exhibit’s highlights?

My favorite section is the one, called Dago!, focused on the largely overlooked prejudice, which Italian-Americans were often victim of.

It not only educates us about our past, but reflects on our present at the same time. We learn how the hostility towards immigrants is certainly not a new phenomenon and, hopefully, we can learn from it and move forward towards a future of greater understanding and compassion.

How went the museum’s inauguration to the public? Did the collection have a good reception?

The various opening receptions, including the private VIP opening, the IAMLA’s members’ opening, and the public opening all went extremely well.

Visitors of all ages and origins expressed a sense of wonder and amazement about this seldom-explored chapter of history. Those who had waited for the museum’s opening for some time also expressed a sense of enthusiasm for the quality and interactive nature of our permanent exhibition, as well as a sense of contentment that this history is preserved for future generations.

During our first three days open, the museum welcomed 800 visitors.

What are your plans in the near future as far as temporary exhibits, screenings and lectures?

We will be announcing a complete program shortly. The first temporary exhibition will debut in early 2017. While the building was originally used as a lodge and banquet hall, our primary focus will be operating as a museum and offer a rich calendar of events.

The IAMLA’s educational programming, which has been offered for years, despite the fact that the museum was under construction, continues, thanks to generous gifts from the Albertsons Vons Pavilions Foundation, which allows us to educate young people and their families about the importance of healthy eating and how to do so in an economical fashion.

Thanks to a generous grant from the Albert J. Casola Trust, we also offer two California Education Standards-based curriculum available for download on our website, which are already in use in Southern California classrooms. We will be releasing additional activities for K-12 visitors shortly.

Of course, the museum’s largest annual event, Taste of Italy, takes place on October 1st, and features some of the region’s best Italian restaurants, over 100 fine Italian wines, live entertainment, and chef demonstrations.