The year was 2005. Around the start of the web 2.0 era. LinkedIn just went from less than 100,000 to 1M members. Business networking was limited to Ivy League business school alumni associations, vendors driven tech gatherings, industry associations, and the classic clubs: from your dad’s Rotary to exclusive “co-member nominated” business councils. Local Chambers of Commerce and international trade commissions were struggling to keep up with the increased speed and dynamism of the New Economy. Three San Francisco professionals thought they could change the way Italians networked in Silicon Valley. Now, with the 10th Anniversary Party just celebrated at Campari America in San Francisco, the opportunity for past and present members of the Business Association Italy America to reunite and cheer to these years’ achievements presented itself.
This is how BAIA story began. “Back in 2005 – explains Giorgio Ghersi, one of the cofounders with Matteo Daste and Michele Ursino – we became aware of how many people we knew in our industries (architectural design, software, and business legal counselling) had a common Italian matrix. Nevertheless very few seemed to systematically connect to each other for mutual professional interest. That was not the case with the other Europeans, or with the various ethnic or heritage groups. Therefore, we started looking around, found similarly motivated individuals, researched what was working and what not, and did our best to build a modern and light networking infrastructure, focused around business, careers and entrepreneurial development. Then, in March 2006, we opened it up to everybody we knew and to their various degrees of connections. That powered up the network, and… there was BAIA.” 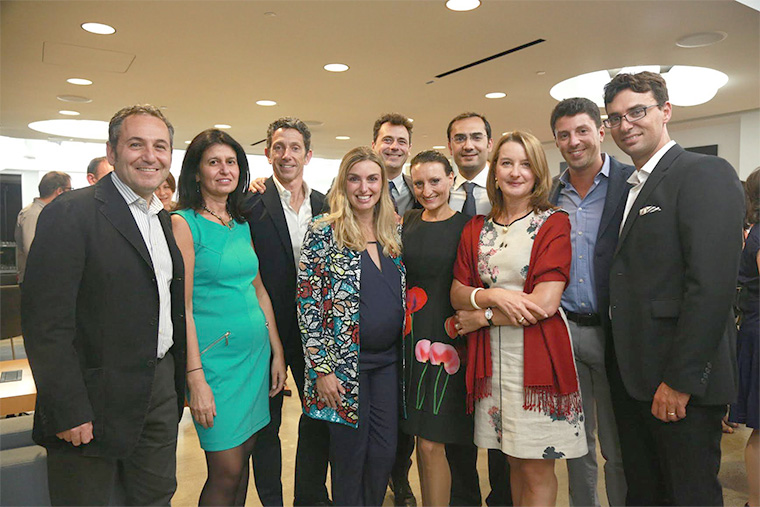 Today the association has impressive numbers, as the last decade results have shown. Vincenzo Mitolo, the current Executive Director, points out: “BAIA has two locations worldwide San Francisco and Rome, 5000+ registered members, more than four events per month and a team of 20 people who are the backbone of this association. Looking forward, I expect to see the community growing in numbers and BAIA becoming the strongest hub for Italian businesses in the Bay Area. If you are interested in collaborating and bringing new ideas, BAIA doors are always open!”
How is BAIA building a bridge between Italy and the US? Matteo Fabiano, one of the first Board Members, has the answer: “BAIA plays a pivotal role in facilitating business and investment between Italy, the US and the Bay Area. Italian companies see the opportunity represented by the US market and want to tap into the innovation laboratory that is Silicon Valley. The BAIA community is a natural entry point. Without it, companies would have a much harder time exploring US business opportunities and establishing valuable connections.”
One of BAIA strengths lies on the ability to keep innovating without losing focus on its mission. Today Franco Folini embodies this continuous effort. As a Board Member he launched the Geeks Meetup in February 2015 and the BAIA Executives in October: “I started the BAIA Geeks group as a way to improve the engagement of our members and supporters. – He tells – While most events have a top-down approach, I wanted to involve everybody in their organization. The success of the experiment prompted me to apply the same method to another sub-group of the community, and we started the Executives Meetup. One important and positive side effect of the meetup format that I didn’t anticipate is the ‘aggregation factor’. Every time I see a new friendship or a new business relationship that originated from a meetup, it proves that those events are fostering a powerful network of connections, something that was clearly missing among those communities.”
Grazia Bennett and Elisabetta Ghisini have been running various initiatives for the organization and both agree on the precious contribution of women: “Their role has been critical throughout the years – Grazia, a Board member, states – We are a group of very motivated professionals who enjoy working together, feel free to disagree and like each other on a personal level. BAIA women have been an inspirational role model for both men and women in the Bay Area business community.” And Elisabetta, former Executive Director, continues: “Everybody is valued  for their contributions. It helps that we are a virtual organization, where results matter while face-time does not. And it helps that we are all flexible: if you can’t attend a meeting, you may call in, or sometimes skip it. As long as you deliver, we’ll make it work.”
BAIA replicated the same model in Italy. That’s what Flavio Notari told us about BAIA Italia: “We introduced the concept of an open network in which professionals, entrepreneurs and managers started exchanging, in an efficient and effective way, knowledge, information and opportunities. I am proud of having contributed to the foundation of the Italian chapter and volunteering every day with Marco Sgroi and other valuable people to “give back” to our country and our networks, fostering business opportunities, relationships and promoting a culture of innovation through entrepreneurial spirit and principles.”
And here is BAIA now, ten years later, supported by a third wave of volunteers who, together with some of the original trailblazers, are making sure the Italian professional, entrepreneurial and managerial community in the Bay Area remains visible, welcoming, and relevant.
Receive more stories like this in your inbox