During this past summer, I attended my friend’s bachelor party in New Orleans. Prior to visiting the Crescent City, I had made preliminary arrangements to mix some business with pleasure and schedule an interview with Lena Prima, daughter of Louis Prima, the irrepressible, jazz trumpeter, singer and just a gigolo New Orleanian showman from the1930s to the 1970s. We met at the Hotel Monteleone, an establishment that hosted American literary writers like Ernest Hemingway, Tennessee Williams and William Faulkner. The location is also a place where Lena had a singing residency for several years and her father, before her, had performed, in the hotel’s Skylight Room.

Now in the 21st century, Lena Prima carries on her father’s music and proud ethnic heritage, along with starting a non-profit organization Ciao Women, which recognizes Italian American women from Louisiana. Initially, Lena reminisced about her father. “I remember my father as a shining light with charisma and a happy persona that made everyone happy.” His gesticulated performances on the stages of Las Vegas and the Big Apple earned Louis the nickname The King of Swing. 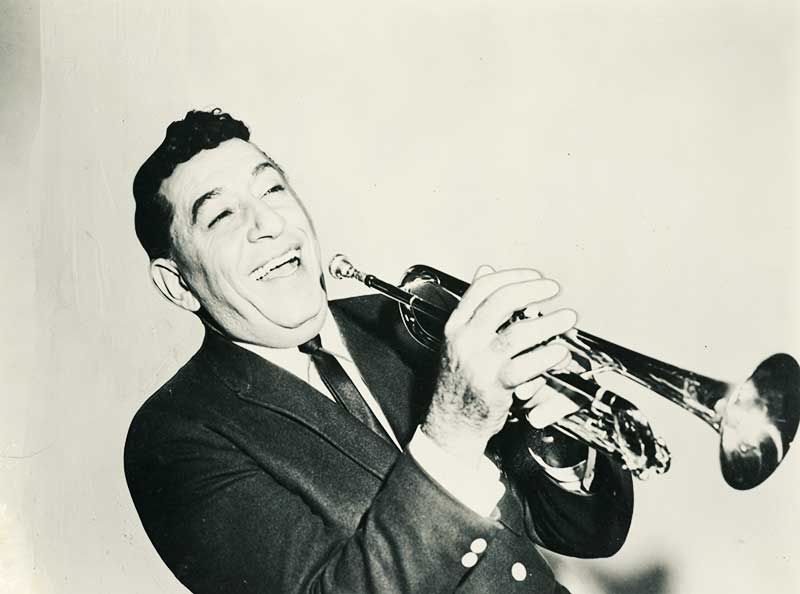 Promotional portrait of Louis Prima in the 1950s. Photos courtesy of the New Orleans Jazz Museum

He sang catchy jingles using Italian accents and words in ballads during a time of considerable xenophobia. In essence, Louis became the de facto ambassador between Americans and those against Italians in WW II.  His popular hits, of which critics opined that Prima played into the ethnic stereotype, like Angelina, Felicia No Capricia, Buona Sera, My Cucuzza, Topolino, Please Don’t Squeeza the Banana and Baciagaloop (Makes Love on the Stoop) were a large part of American entertainment, and his life is presently highlighted in an exhibit at the New Orleans Jazz Museum. “Louis Prima,” as music curator David Kunian for the museum explained, “deserves to be considered with the icons of New Orleans music. He is up there with Armstrong, Bechet, Toussaint, Domino, Dr. John, and Lil Wayne.”

Louis Prima and his wife Gia Maione had two children, Lena was born in (Las Vegas) 1963 and Louis Prima Jr. in 1965. In 1963, Gia became the entertainer’s fifth wife and replaced another one of Louis’ ex-wives and most popular band mates, Heely Smith. Gia joined Prima, Sam Butera and the Witnesses for several years until Louis passed away in 1978. 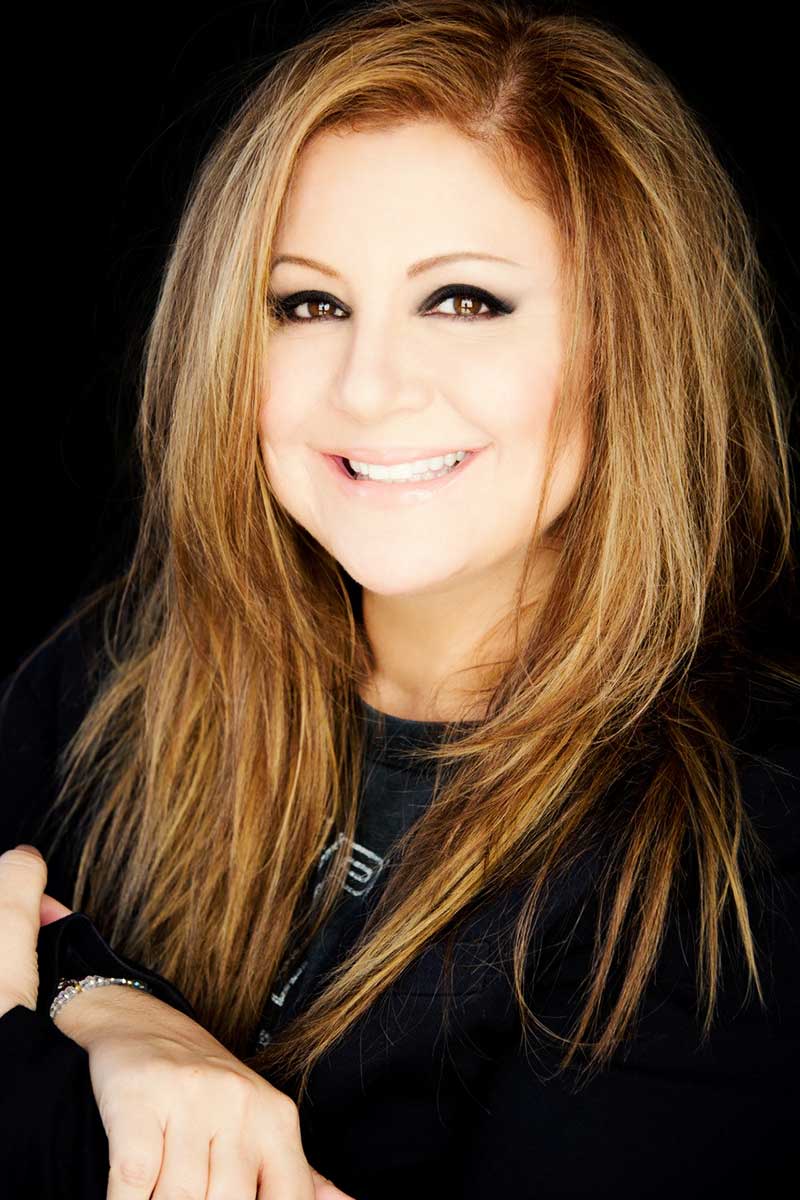 Lena was fourteen when her father died. His passing prompted her to carry on his music and create her own singing career. At an early age, she followed her parents’ musical path. “I remember the first night I performed with my father as if it were yesterday.  It was in 1969 at the Sands and I sang the only song I knew at five/six years old, Santa Claus is coming to Town. From then on,” said Lena gleefully, “I loved to sing.”

The singer continues to entertain, as she recently released, in early 2019, Prima  la Famiglia, that debuted at #10 on the Billboard Jazz Chart. “The songs are a representation of what Italian Americans grew up with back in the 40s, and that carried on throughout generations. They played this music in their family homes, at Sunday dinners, weddings, and they are just beloved songs,” explained Lena. 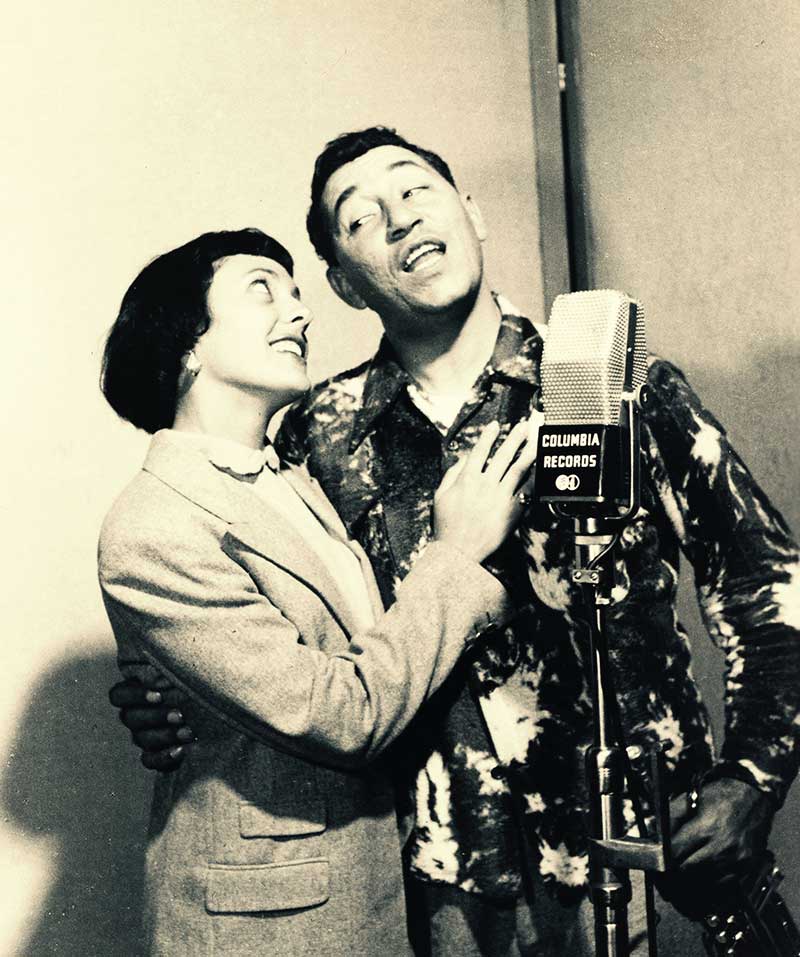 For many Italians and Sicilians, Prima provided a combination of Dixieland and swing. “Louis Prima was my childhood hero growing up in New Orleans,” said Rocco Cardona, a taxi driver and a lifelong resident of the Big Easy. “We loved the guy because he was Sicilian like many of us,” Rocco said. Similar to Rocco and his family, Louis Prima’s relatives, like most Sicilians in New Orleans, emigrated from the island in the late 19th century to find work in the Louisiana fields.

Several thousand Sicilian immigrants disembarked along the Mississippi and reached New Orleans. Many lived in the French Quarter and adjoining districts, and by 1910, there were more than 23,000 Italians living in Louisiana.  At one point, the French Quarter was sometimes referred to as Little Palermo. Louis Prima, the second child of Anthony Prima and Angelina Caravella, was born on St. Peter Street in the Tremé neighborhood of the Big Easy.  Louis’ older brother Leon, a musician, inspired him to play the trumpet as did Louis Satchmo Armstrong.  Louis was lucky enough to hear and learn from many of his hometown musicians, and that was the secret to his success. 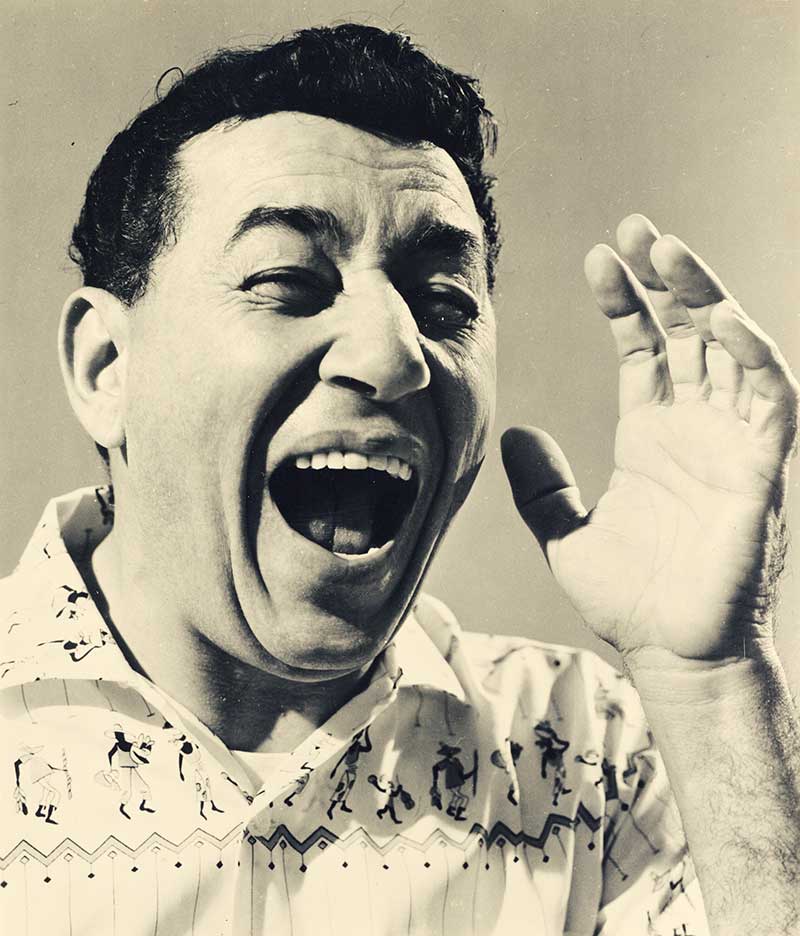 Prima’s hepcat jive and musical improvisation impressed many in the jazz world, especially because of his Italian American upbringing in New Orleans. The city, as it  was typical of most urban centers, was defined by various cultures and allowed Prima to interact with all races and nationalities. “I remember hearing a BBC interview of my dad in the early 1970s where he described growing up in a neighborhood with no fences in between houses and the streets were made of mud,” said Lena.

One of the songs on Prima la Famiglia, which Lena sings, is Darktown Strutters Ball, a direct New Orleans sound that her father first sang in Sicilian and Yiddish. “He would sometimes end his shows singing C’è la Luna Mezz’o Mare and suddenly cross over to Hava Naglia, and the audiences would go into a frenzy,” explained Lena. As Lena has grown older, it has gotten closer to her Italo American roots.  “My father was very proud of his city and culture and he would always tell me ‘be proud of your name, Prima means first.’” 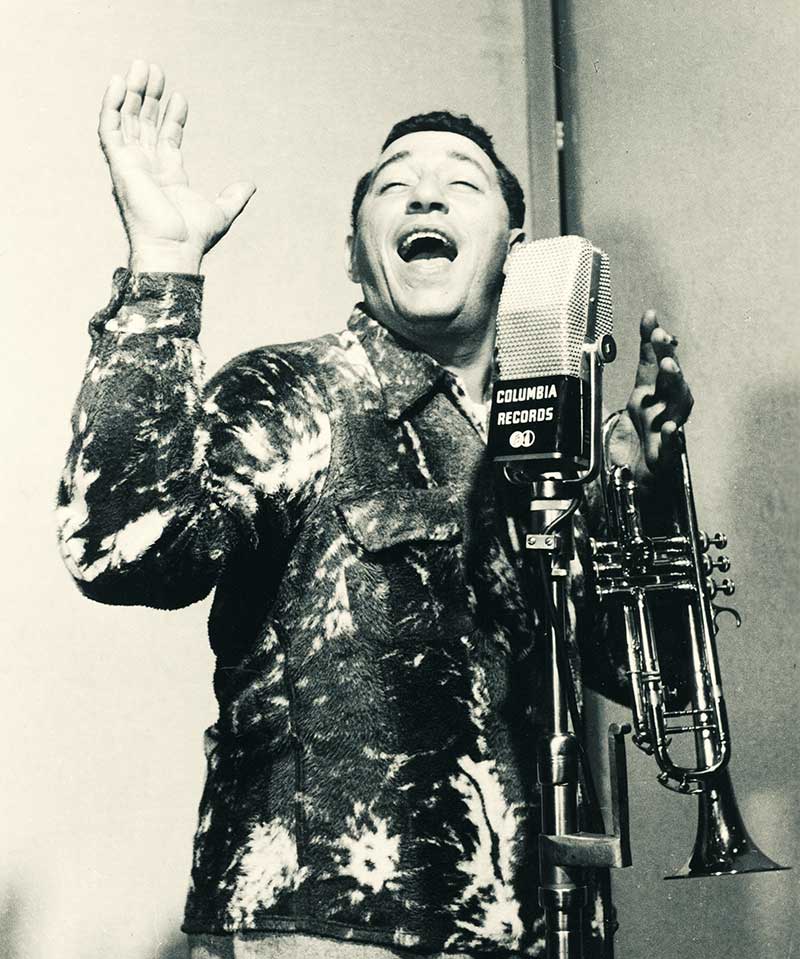 In 2011, Lena and her husband decided to move from Las Vegas to her father’s hometown. Determined to reconnect with her Louisiana heritage, Lena started a nonprofit organization that recognizes Italian American women/men from the state. “I want to work on fun ways to educate others about the rich Italian heritage in Louisiana and perpetuate the Italian American legacy and traditions,” said the singer/songwriter, who was motivated to start CIAO Women by another Italo American.

“Actually I was inspired to start CIAO Women because of Charles Marsala who honored me a few years ago during Italian Republic Day,” Lena said. Charles, a Louisiana native, is very active in preserving and informing visitors about Italian history in the state. He is the host of AWE News that celebrates local heroes in their communities. He launched a tour app for Little Palermo and was recently elected President of Italian American East Organization. “Lena is amazing for New Orleans. She performs many of her father’s hits throughout the state and is truly an inspiration,” declared Charles.

Just like Charles Marsala, Lena is committed to honoring the strong Italian traditions in New Orleans and,  like her father, to bringing joy through the wonderful sounds of jazz. 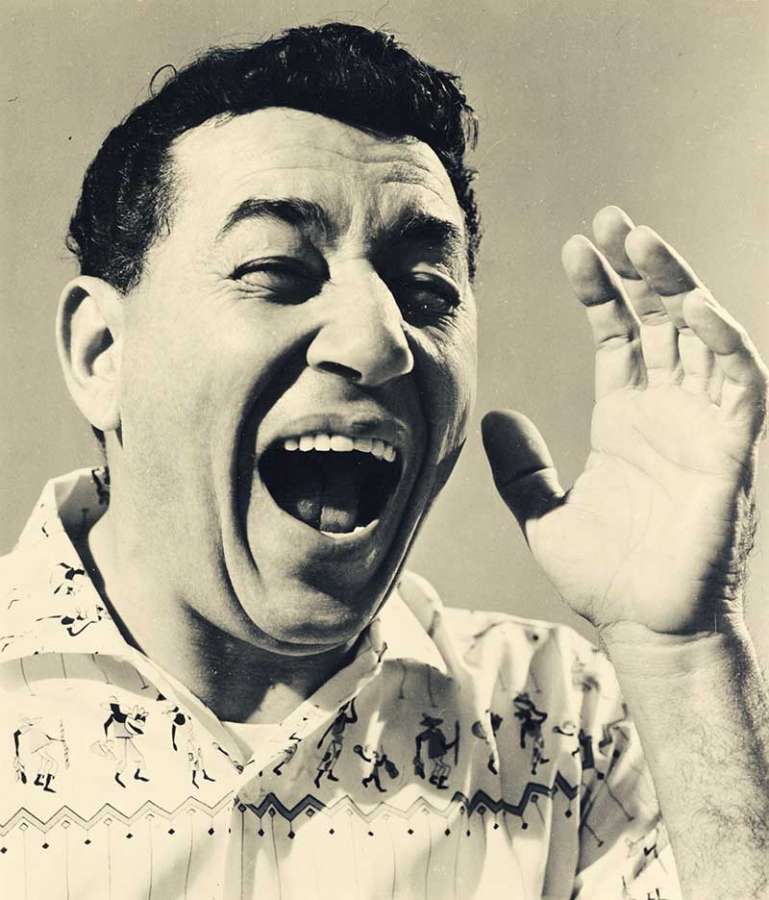 LIFE & PEOPLE
Louis Prima: His legacy through the eyes and ...
Sponsored