Gian Lorenzo Bernini was a genius and his eye for extracting human, animal and spiritual forms from slabs of marble was nothing short of amazing. His powerful works of art are a gift to everyone who has ever visited Italy and even just paused to snap photos of his famous Fountain of the Four Rivers in Piazza Navona or Fountain of the Triton in Piazza Barberini.
But every piece of great art begins with an idea of how the artist wants to portray a particular object or put forth a concept. Even the great Bernini, who is credited with launching the baroque style of sculpture, didn’t just order a hunk of marble and begin chiseling away. He sketched his ideas and usually shaped and fired a rough 3-dimensional model in terracotta. I say, rough, only in terms of them not being the final, finished works of art. They still reveal the genius of the artist.
These terracottas are in fact, the subject of a museum exhibition organized by The Metropolitan Museum of Art in New York and the Kimbell Art Museum in Ft. Worth, Texas. This exhibition, Bernini: Sculpting in Clay, which was shown at the Metropolitan in the fall and winter of 2012, can be seen at The Kimbell Art Museum in Texas.
The clay models offer a unique insight into Bernini’s creative process and in a way give a sense of  being able to peer over the sculpture’s shoulder as his ideas emerged from the clay and in some instances even see his fingerprints left behind on the models.
Bernini was born in Naples in 1598 and obviously received some of his artistic talent from his father Pietro Bernini, also a sculptor. It was a talent that he used for a long career that spanned almost 70 years. And it began in earnest when at the age of eight he went to Rome with his father who had work there.
Even at this young age Bernini showed signs of genius that was noted by Pope Paul V and his nephew Cardinal Scipione Borghese, who became the famous sculptor’s patron. It is the Galleria Borghese in Rome that houses four of the works that established Bernini’s reputation as a master sculptor. These include Aeneas, Anchises and Ascanius, The Rape of Proserpina, Apollo and Daphne and David.
Bernini had the uncanny ability to tell a story in stone, to carve espressions and freeze motion in such a way that a viewer can feel both the emotion and motion taking place. His works have an inherent energy. Bernini’s David is often cited as a prime example, because he chose to depict David in combat with the giant, whereas Michelangelo and others portrayed David as simply victorious after battle. Another example is Bernini’s Ecstasy of Saint Teresa in the church of Santa Maria  della Vittoria, which shows the saint visited by an angel. Another of his famous sculptures, Medusa [in the Capitoline Museums] depicts her Medusa’s head swirling with serpents.
Bernini was also an architect and painter, as well as a designer of metalwork and stage sets. Some of his most well known religious architectural works are the Piazza San Pietro (1656–1667), the piazza and colonnades in front of St. Peter’s Basilica and the interior decoration of the Basilica, the bronze canopy known as the baldachin or baldacchino.
While all of these are large scale works, some of the most interesting aspects of the Kimbell Art Museum’s exhibit is the opportunity to view Bernini’s small terracotta models in relationship to the actual setting of the completed sculpture. It also lets visitors compare the models, in some cases, with the sketches which preceded them. The result is that even over the centuries the visitor gets a small peek into how the mind of a great artist worked through some of the creative process.
For more information on the current Bernini exhibit visit kimbellart.org. To prepare for a trip to Italy to see Bernini’s large sculptures visit getty.edu, slowtrav.com, and rome.info.
Receive more stories like this in your inbox 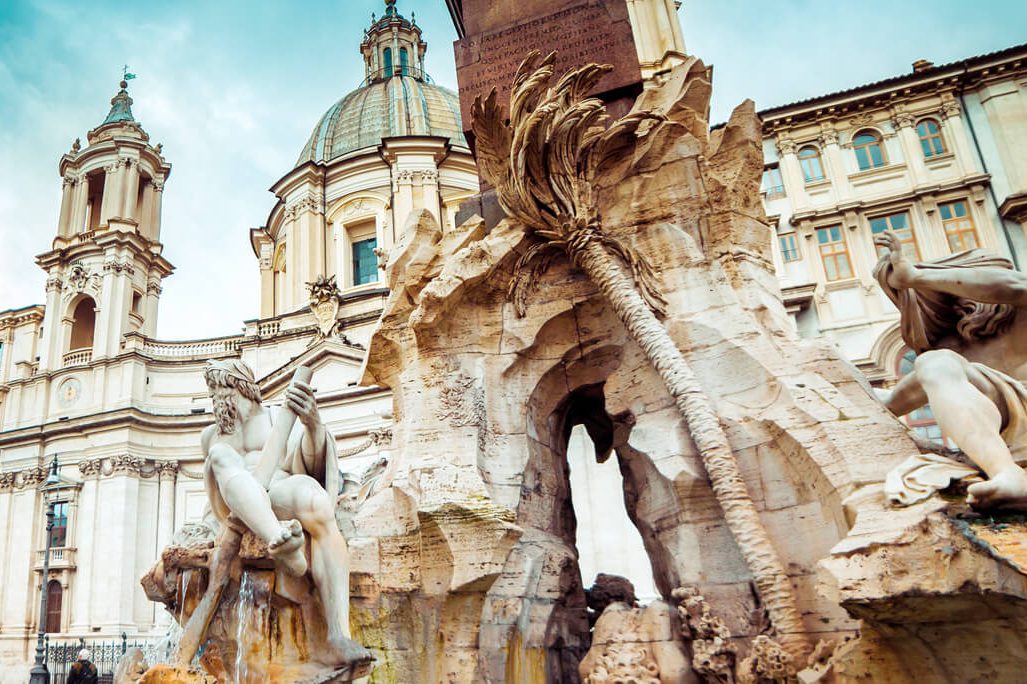