Friday, August 19, 2016, was a typically cool and pleasant San Francisco day on top of Nob Hill as Mayor Ed Lee, the San Francisco Special Events Committee, and fans gathered in front of the Fairmont Hotel.  A city famous for its hills, has been made even more famous by one particular song that goes like this, “I left my heart in San Francisco – High on a hill, it calls to me”, and the singer is, of course, Antonio Benedetto, known famously as Tony Bennett.
In celebration of his 90th birthday (August 3), and in recognition of his many contributions to the City, Bennett was honored with a new statue, a new ice cream flavor, and the title of Mr. San Francisco, bestowed on him by San Francisco Mayor Ed Lee, who also declared August 19 as Tony Bennett Day.
The public dedication and unveiling of his 8-foot-tall bronze statue happened on the lawn of the Fairmont Hotel where Bennett first sang “I Left My Heart in San Francisco” in 1961 in the Venetian Room.  The statue was created by San Francisco Bay Area sculptor Bruce Leslie Wolfe. 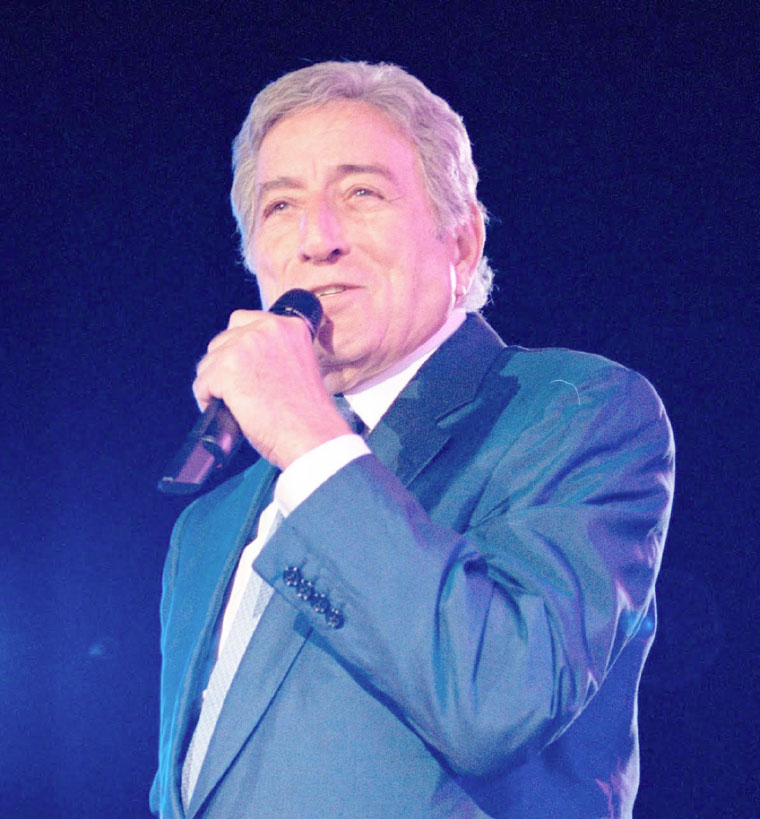 “I can’t get over what just happened,” said Bennett, looking elegant as always in blue. “That’s the most beautiful statue I have ever seen. It will live in my heart forever. Thank you for being so wonderful to me. I’ll never forget this day.”  Many in attendance think Bennett represents one of the best Italian-American entertainers going back several generations.
Later in the evening, the San Francisco Giants paid tribute to Bennett with “Tony Bennett Night” which was followed by a dinner and concert in the Fairmont’s Venetian room on Saturday, August 20. Proceeds from the dinner and concert will benefit the Tony Bennett Fund for Emergency Pediatric Care at Zuckerberg San Francisco General.
In addition to the statue and dinner, Bennett will have a new ice cream flavor, “Duet”, named after him which will feature vanilla ice cream swirled with limoncello sorbet and fennel biscotti to honor Bennett’s Italian heritage.
Bennett was born Antonio Dominick Benedetto on August 3, 1926 in the Astoria section of Queens.  His father died when he was 10 and his mother, Anna, raised Tony and his older brother and sister, John and Mary. While attending the High School of Industrial Arts in Manhattan, Bennett continued nurturing his two passions, singing and painting.  From the radio he developed a love of music, hearing Bing Crosby, Louis Armstrong, and James Durante.
As a teenager, Bennett sang while waiting on tables, and then enlisted in the Army during World War II. While in Europe he performed with military bands. He later completed vocal studies at the American Theatre Wing School.  The first time Bennett sang in a nightclub was in 1946 when he sat in with trombonist Tyree Glenn at the Shangri-La in Astoria. Bennett’s big break came in 1949 when comedian Bob Hope saw him working with Pearl Bailey in Greenwich Village in New York City.
As Bennett recalls, “Bob Hope came down to check out my act.  He liked my singing so much that after the show he came back to see me in my dressing room and said, ‘Come on kid, you’re going to come to the Paramount and sing with me.’  But first he told me he didn’t care for my stage name (Joe Bari) and asked me what my real name was.  I told him, ‘My name is Anthony Dominick Benedetto’ and he said, ‘We’ll call you Tony Bennett.’
Bennett was honored with the Grammy Lifetime Achievement Award in 2001 and became a Kennedy Center honoree in 2005.  He is also a celebrated painter with three of his original works housed in the Smithsonian Institution’s Permanent Collection.
The Fairmont Hotel website describes the legacy of the song, “I Left My Heart in San Francisco”, written in 1954 by George Cory and Douglass Cross, by saying that Bennett’s first rendition in 1961 was heard by then San Francisco Mayor George Christopher and future Mayor Joseph L. Alioto. In 1969, the song was adopted by the City and County of San Francisco as one of its two official anthems (the other being the title song from the 1936 film “San Francisco”.)
In 1999, to commemorate the restoration of the Fairmont San Francisco, Bennett placed a time capsule in the stage of the hotel’s famed Venetian Room. The capsule contains personal items, including a red Baccarat crystal heart gifted to Bennett by Liza Minnelli. Bennett explained that Minnelli gave him the heart to replace the one he left in San Francisco.
In his 1998 autobiography, The Good Life, Bennett said, “The song (I Left My Heart in San Francisco) helped make me a world citizen: it allowed me to live, work and sing in any city on the globe. It changed my whole life.”
The City’s recent celebrations honoring Tony Bennett seem to have touched his heart, much the same as he’s touched ours for decades. San Francisco will always welcome you, Mr. Benedetto.
Receive more stories like this in your inbox