Sitting at the crossroads of Western and Eastern Europe, the city of Trieste showcases both Mediterranean and Continental characteristics: this combination of aspects makes for an interesting travel destination that brings together culture and gastronomy, sport and the arts.
Located on the verge of the Italian and Slovenian border the largest city of the Northeastern region of Friuli Venezia Giulia offers sweeping views of the sea, elegant architecture and a lively nightlife scene: a hearty cuisine, famous local wines and a never-ending series of interesting events attract each year thousands of visitors, yet Trieste never feels overly crowded and it oozes charm and a certain joie de vivre.
Possibly the city’s most famous attraction, the Castello di Miramare is an absolute must-see for history buffs and is a great place to visit for those who are traveling with children.

As the name suggests, the castle is built overlooking the Gulf of Trieste, only 6 kilometers from the city center, and was commissioned in 1855 by Maximilian archduke of Austria, who wanted it to become his primary residence to be shared with his young wife, Charlotte of Belgium. The couple moved in in 1860, but barely enjoyed the castle, as Maximilian was captured and executed during a trip to Mexico by local rebels. His wife slowly but steadily lost her mind and returned to Belgium, leaving the castle’s interiors unfinished.
Surrounded by a gorgeous park filled with precious and rare botanical species, Miramare captivates his visitors thanks to its dramatic location on a cliff high above the sea and it showcases an impressive collection of furniture and decorations that belonged to the unlucky royal couple.
The city center in general and Piazza Unità d’Italia in particular offer several chances to admire the grandiose architecture that distinguishes the city, typical of ex Austro-Hungarian imperial towns such as Trieste itself, Vienna and Budapest. The Palazzo delle Poste, built between 1890 and 1894, is today a very interesting museum dedicated to the postal service, showcasing historical telegraph machines, stamps, maps and even part of the Elettra, the ship/laboratory used by famed inventor Guglielmo Marconi.

Prosciutto, salami, speck, pancetta, some of the country’s most renowned salumi

Prosciutto, salami, speck, pancetta, some of the country’s most renowned salumi

Historically the city has always had a deep connection to the sea, not only because it is Italy’s largest port: it is also well loved by sailors because of the constant strong winds that blow in the area. Each year it hosts one of the world’s largest and most important regattas: the internationally renowned Barcolana.
Each year since 1969 it draws an incredibly large number of sailing aficionados and tourists, sometimes as many as 250,000: the whole town participates to the event with street markets, music and activities, making the beginning of October one of the most memorable times of the year to visit the city.
Gastronomy, too, plays a very important role in the life of the city: because of its history and its several foreign influences the town’s cuisine is everything but ordinary and shows characteristics from the Italian, Slovenian and Austrian heritages. A deep love and respect of the territory and its products is clear and evident all around Trieste’s restaurants, most of which feature products typical of the region such as white asparagus, salame from Sauris, world famous prosciutto from San Daniele, smoked trout from Carnia and many others.
A special mention goes to the region’s excellent wines, some of which are only produced in the area: absolutely worth a try are the Friulano white and the red Refosco dal peduncolo rosso.  For a special sweet treat stop by Pasticceria Penso, where all the best of traditional Austrian specialties are prepared daily: as soon as you walk into the door the heavenly smell of butter will win you over and you will instantly forget all about your diet.
To savor the town’s seafood specialties have lunch or dinner at Trattoria Nerodiseppia, on the water front: fish doesn’t get any fresher (or better) than at this traditional eatery.
Trieste is reachable by car by taking the A4 highway Venezia Trieste (about 1 hour 45 minutes from Venice), by train from Venice and Milan or by boat from nearby Croatia. The closest airport is Aeroporto Internazionale Ronchi dei Legionari in Gorizia and is connected to the city center by shuttle bus (about 1 hour).
Receive more stories like this in your inbox

Camogli: tranquility on the Golfo Paradiso 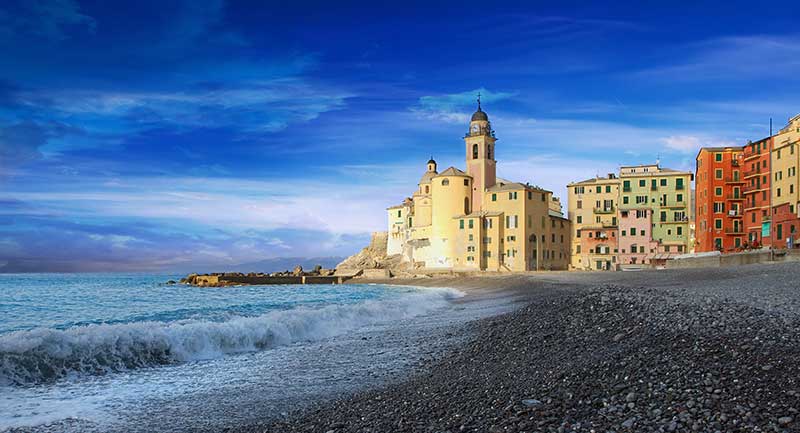