fools our fond gaze, and greatest of the great,

defies at first our Nature’s littleness,

till, growing with its growth, we thus dilate

our spirits to the size of what they contemplate.

“Gesù, Gesù, Gesù” – Pope Francis’ calm voice rings out over Saint Peter’s square at 10.30 this morning as he addresses the piazza.  “This is a simple prayer you can say everyday: Jesus, Jesus, Jesus” – he continues, asking us to repeat those words. The whole piazza speaks with him, and there is a ripple of sound across the giant square.

Saint Peter’s square is stunning, and the Basilica is a shining jewel as well. It is hard to find words to equal its beauty and magnificence. The American philosopher Ralph Waldo Emerson described it as “an ornament of the earth… the sublime of the beautiful”. Byron felt it defied the very nature of ourselves, so sublime it is in character. Every angle has a different beauty and the Basilica dominates the skyline: 284 columns, 88 pillars and 140 statues of saints surround us in a mixture of granite and travertine stone, while the Egyptian Obelisk stone pillar extends 25 meters into the air above us. It is remarkable that this square and church were created hundreds of years ago – and it feels surreal that all we are seeing was actually conceived and created, built and constructed by mere mortals. The square comes under the architectural expertise of Bernini, while the Basilica – a masterpiece of Renaissance architecture – is a mixture of work by legendary architects including Michelangelo, Bramante, Bernini and Fontana.

A view over Rome, with San Pietro in the distance

Our group watches on under the open azure sky in Vatican City, among thousands of other pilgrims gathered from all over the world. We were privileged to have front-row seats so the views were outstanding. Pope Francis’ message is really one of forgiveness, based around the chapter from the Gospel of Luke when Jesus dies between two criminals. He urged us to consider the fact that “un condannato è un nostro modello” – a thief is a model for us in this story. Both thieves had done wrong, but one of them repented, and we are to look to him as our model – that no matter what we have done, we can be forgiven. Even though we are among masses of people, it all feels like an intimate experience, as the Pope uses the same words that one would use when addressing dear friends: “Just think about it” he says. It feels like an honor to participate in the personal reflections of this man. 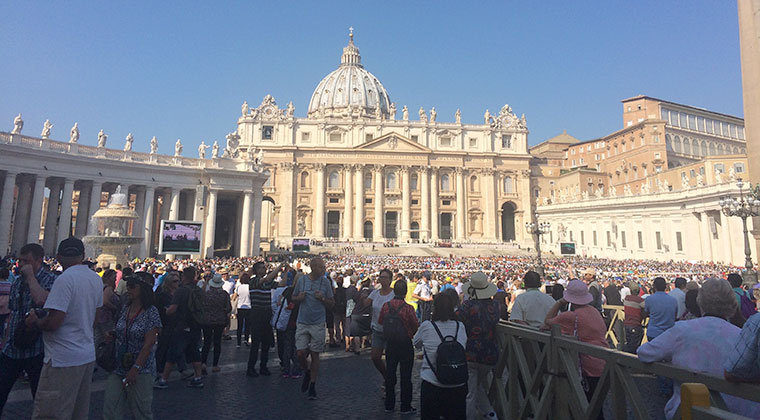 The ‘ornament of the earth’, that is Saint Peter’s Basilica, Vatican City

The Pope blesses all the other pilgrims that have come, and goes nationality by nationality – with papal representatives extending the blessing in their native language. An American priest welcomes and blesses all the English-speaking pilgrims. Standing in front of us with matching purple t-shirts, a huge group from Malaysia cheers when their blessing is said. There also is a group of pilgrims from West Africa, with hand-designed matching dresses in Vlisco material (featuring the Pope’s face as a design) wrapped traditionally around heads and bodies.

A view over the River Tiber, Rome

At the sounding of the Angelus, we make our way over the Tiber River towards Piazza della Chiesa Nuova, passing by the gargantuan ship-like Castel Sant’Angelo. Alabaster statues adorn the bridge which takes us across the river, and we walk like tiny ants through the wide streets as Vespa scooters and other motorbikes weave their way around us.

Looking up at the immensity of Santa Maria in Vallicella church, Rome

It is only in Italy that the shopkeeper will lovingly tell you the history of the piazza opposite his shop, or that the hotel receptionist recites cantos from Dante’s Divine Comedy. As we stop to buy a delicious homemade ice-cream from one of the many gelaterie, the owner points out the church of Santa Maria in Vallicella and the Oratorio dei Filippini in the near distance…

Great and small – standing outside the Chiesa Nuova, Rome

But unfortunately our Italian journey has to come to an end.

This experience, which has involved five different continents and five trails – winding their ways through the regions of Umbria, Marche, Tuscany, and Lazio – has really been marvelous, una meraviglia. Tracing the footsteps of Saint Francis on our Cammino Francescano della Marca, and following the path he followed in 1215 when preaching between Assisi and Ascoli, has been unforgettable. 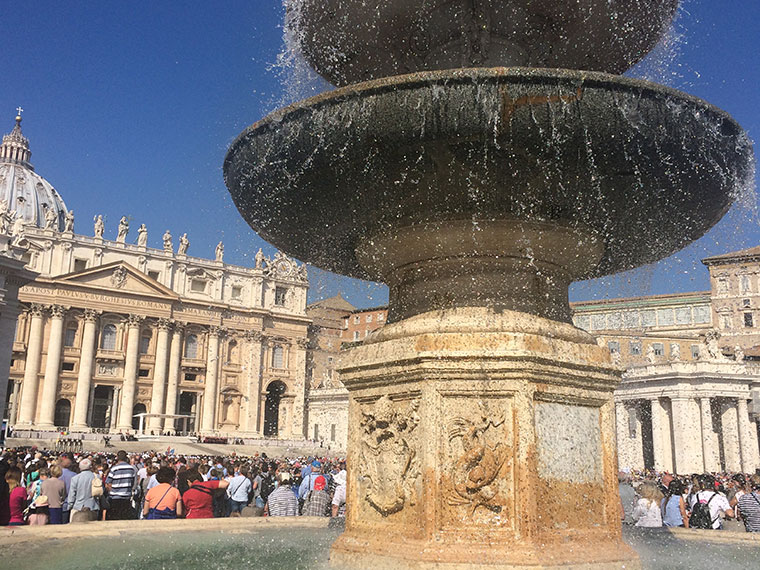 Santiago is by no means the only cammino. This trip has proved to me that Italy, too has its own wonder ways – and I am extremely thankful for the experience of walking one of them, and then meeting with all the other camminatori in Rome, the “city of illusions, echoes and desires”, in Giotto’s words. Pilgrims from other groups have stories just as wonderful as our own about the week they spent here. “Non ci sono parole” (“There are no words”) is what I overheard one participant say as he was trying to sum up his experience.

Looking out over the River Tiber, Rome

As a person of faith, the physical aspects of this pilgrimage have been enlightening. Every day has brought a different terrain and a new challenge, an unknown one – just as the seasons and days of our life do. We have learned to rely on the kindness of strangers, to help us accomplish our common goal – whether that is an encouraging word on a tricky path, or a hand-up over a steep ascent. Our guides – Luciano and Mauizio – have safely led us to the paths they knew.

One of the many statues lining the bride across the River Tiber, Rome

These are ways and trails that everyone would enjoy, whether religious or not. The experience is spiritual, but it is also a time to connect with nature and yourself: you can do it quietly or with lots of conversation with your fellow pilgrims. In both cases, the bucolic plains and mountains, forests and fresh air would inevitably woo you into a deeper relationship with the land around you, revitalizing all of your senses, while the local people would also be beautiful in their welcome, divulging the amazing secrets of central Italy. 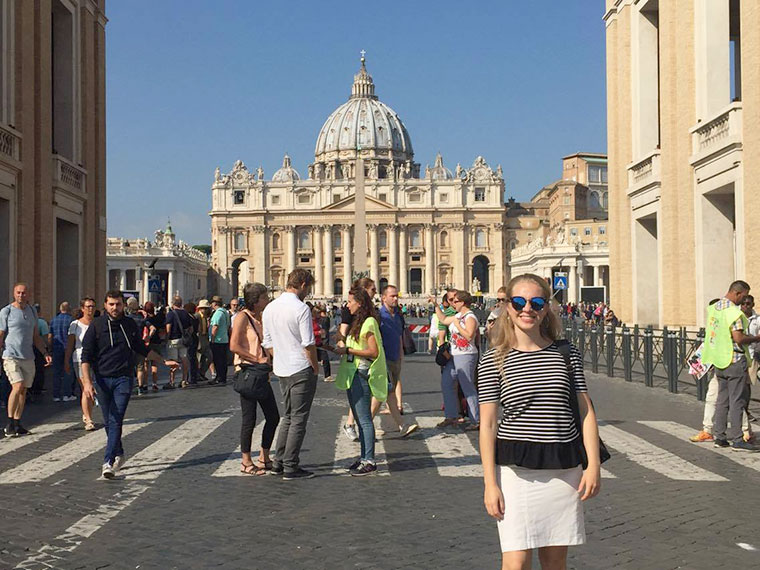 Outside the Basilica di San Pietro

I think of the celestial food and wine we have tried – especially the cannelloni in Saint Francis’ convent in Pievefavera, or the cheese straws served on grand mirrors in the Villa Tuscolana! I think of all the fun we have had – the Celtic music of the Gallic-Apennine people in Colfiorito! I think of the vibrant frescoes that cover the Basilica of Saint Francis in Assisi, and of the marble city of Ascoli Piceno! The people I have met on this cammino, I shall carry them in my heart just as the characters of a book – though I do not know if we shall ever see each other again, the moments we have shared have been deeply significant.

It has been an absolute joy embarking on this pilgrimage as an ambassador for L’Italo-Americano. Thank you for sharing this journey with me. I leave you with the words of Saint Francis himself in his famous Canticle of the Creatures – a song I will surely bring with me forever.

Be praised, my Lord, through all Your creatures,

especially through my lord Brother Sun,

who brings the day; and You give light through him.

And he is beautiful and radiant in all his splendor!

Of You, Most High, he bears the likeness.

Be praised, my Lord, through Sister Moon and the stars;

in the heavens You have made them bright, precious and beautiful.

Be praised, my Lord, through Brothers Wind and Air,

and clouds and storms, and all the weather,

through which You give Your creatures sustenance.

Be praised, my Lord, through Sister Water;

she is very useful, and humble, and precious, and pure.

Be praised, my Lord, through Brother Fire,

through whom You brighten the night.

He is beautiful and cheerful, and powerful and strong.

Be praised, my Lord, through our sister Mother Earth,

who feeds us and rules us,

and produces various fruits with colored flowers and herbs.