Shimon Schwarzschild, like Saint Francis of Assisi, could have opted for a comfortable and lucrative life, but instead has chosen a more steep and rough path at the service of a greater cause.

The small town of Assisi (Umbria region of Italy) played a pivotal role in both of their “conversions.”

In the same way as the Roman Catholic friar and preacher became associated with the patronage of animals and the natural environment, Shimon has been at the forefront of our planet’s safeguard.

No matter where Shimon fought his battle – whether in Assisi, to save its songbirds’ population from decimation, or, in the Pacific Northwest, to stop the deforestation of wild yew trees – he has always prevailed in the end. 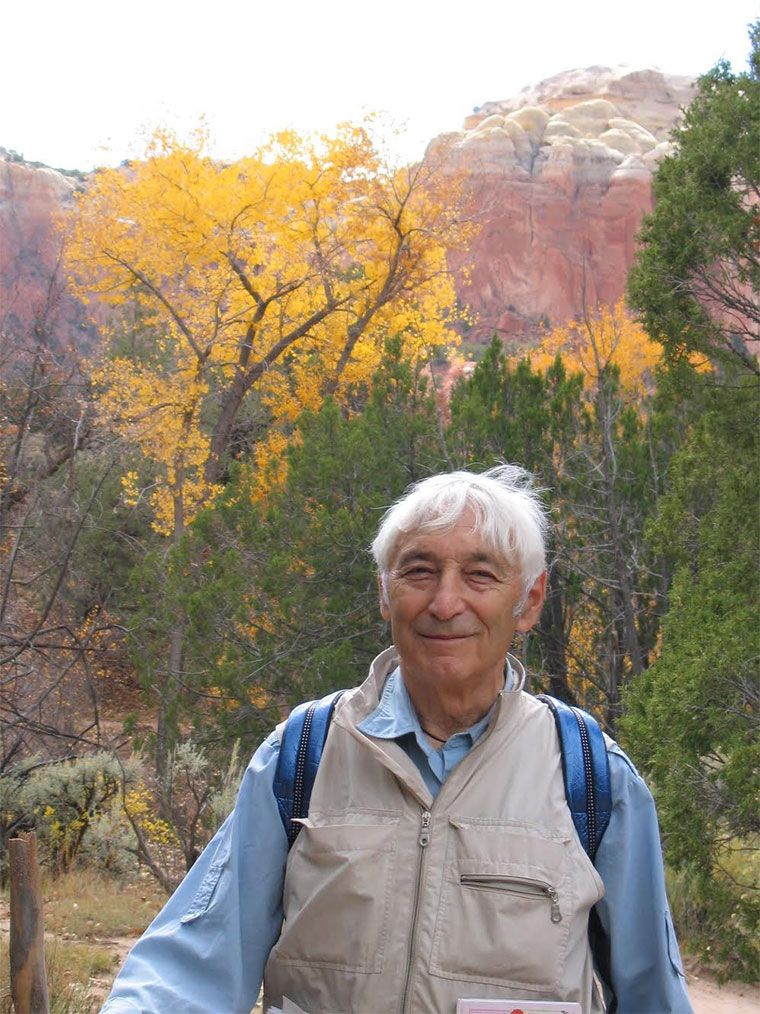 What’s your cultural background? What prompted you to switch from an engineering to an environmental conservation career?

I am a German Jew, who, until age 10, lived in a close-knit orthodox Jewish community dating back to the 1400s, in the midst of a German agricultural town. In 1936, the advent of Hitler forced my parents to escape Germany and the Holocaust and immigrate to North America.

There, we lived in Jersey City, and I went on to graduate from grammar and high school, just in time to enlist in the US Navy to fight in WWII against Japan in the Pacific. The Navy trained me to become a Radar Technician serving aboard various warships.

After discharge, my military service enabled me to go to engineering school under the “G.I. Bill of Rights,” then on to establish a lucrative engineering sales company in California.

I believe that my uprooted early childhood caused me to develop a strong empathy towards fellow “underdogs” – people who experienced persecution or discrimination like I did. My reaction to injustice eventually pushed me to become involved in, and to fight for my neighborhood’s and city’s livability.

In 1978, I began discovering how most of the purchase orders my company received for “peaceful” scientific products, purchased by “peaceful” customers, such as universities and  research institutions, were paid for by a military agency!

So after a 30-year engineering career, I decided I did not want to keep relying financially on the military! I was already volunteering most of my spare time to neighborhood improvement and advocacy of the environment, so I resigned from my lucrative engineering partnership, ready for a full-time career in environmental conservation.

I succeeded in achieving one-fourth my former income, but reached over four times the satisfaction!

In 1981, your trip to Assisi, ended up being a pivotal experience in your life. What happened then?

In October 1981, I went to Assisi at the urging of an Italian-Swiss conservationist friend, Marisa Cohen, to recuperate from a very intense three-year job, building a chain of Californian coastal youth hostels.

She urged me to climb Saint Francis’ mountain “…where St. Francis preached to the birds.” To make a long story short, I found only shotgun casings and no birds there, and started a national and global campaign, the Assisi Bird Campaign, to bring back Francis’ songbirds, that ultimately won a permanent moratorium on the hunting of that beautiful species in that area.

Today, A.N.C. is a council of representatives of Italian nature protection organizations, still headed by Marisa.

Afterwards, you founded the US affiliated organization, Action For Nature, whose main mission is “to encourage young people to take personal action to better their environments and to foster love and respect for nature.” What has been accomplished since its foundation?

In 1984, I went on to organize the US affiliate, Assisi Nature Council-USA, later renamed Action for Nature (AFN). While we initially had a broad mandate, we soon realized that to be effective in carrying out our objective, as a small volunteer-run and -staffed organization, we needed to focus on feasible, smaller scale goals.

We developed our “Eco-hero” yearly award program, in which we selected, awarded, and publicized “eco-heroes” from around the world, who, on their own initiative, had found and fixed some environmental issues in their communities.

To date, we have awarded over one hundred eco-heroes from over twenty countries. The awards, while modest, are very effective, because their resulting publicity and recognition open up enormous opportunities for the winning eco-heroes, who often become advisors to presidents and prime ministers, or global environmental “ambassadors.”

Despite moving away from San Francisco, where our Committee meets, I am still an active Board of Directors’ member.

You also co-founded the Native Yew Conservation Council (YewCon), to protect wild yew trees, that are a precious source of the anti-cancer chemical “taxol.” Please, elaborate on that.

After many environmental protection crusades that depleted my time and my funds, and prevented me from holding ordinary money-making jobs, I finally earned a regular livable income as Technical Publications Editor in the biosciences, with the U.S. Forest Service (1988-2000).

One day, I learned that “my” agency was allowing contractors of the pharmaceutical giant Bristol-Meyers Squibb to cut hundreds of thousands of wild yew trees in the forests of the Pacific Northwest.

Together with fellow editor, Dr. Stanley Scher, we published a paper cautioning the scientific community about the destruction of these wild forest trees. I then co-founded with Stan and half a dozen other concerned people, the Native Yew Conservation Council (YewCon), to attempt to stop this destructive practice, since we knew that the anti-cancer compound, “taxol,” could also be extracted without killing the trees.

Our battle to both stop the deforestation and extract taxol to save cancer patients, took over 5 years, but we prevailed. Today, the world’s wild yew tree population is securely thriving.

What’s your opinion about Los Angeles?

Part of what I considered the charm of LA’s downtown was Pershing Square. When I discovered it, during one of my visits in the late 50s, the green area had some facing benches that invited social intercourse, and was frequented by the young and the old alike.

The interesting dynamic that I found there, was reminiscent of the famous Speakers Corner of Hyde Park, London. Especially in the warm evenings, individuals would engage others or just mouth-off  their grievances or poetic creation. I found the social and political rhetoric fascinating.

While some speakers gave their rendition with emotion, I never saw any acts of violence beyond conversational discourse. I felt safe. Apparently, the authorities who were bent on their own campaign of revitalizing LA’s downtown felt differently.

One day, months later, I returned to LA for another business visit. I found a re-constructed but sterile and denuded green area. The new “park” had fewer benches with none near or facing each other – and no patrons! The park was cleaner, but it was also empty of people. I thought that was the City’s antidote for reducing “undesirables” in Downtown. In a perverted sense, the authorities had been successful!

After that disappointing visit, I never went back to Pershing Square again.

I recently learned that the entire park had been in a transition, before being totally revamped and revitalized, complete with summer concerts, ice skating, children’s playground, youth programs and other amenities.

In retrospect, I had been lucky enough to visit Pershing Square during the park’s brief interlude of “neglect,” before its planned transition to the extravaganza that it now is.

Are you planning to go back to Italy, where your environmental activism started over thirty years ago, in the near future?

I would go to Italy at the proverbial “drop of a hat.” Since my Assisi environmental adventures (1981-84), I have been back twice, the last time about 6 years ago.

In my latest trip to Assisi, my highlight was a short visit to the cathedral, where I climbed the scaffolding with a construction helmet on, to try to re-attach a few of the thousands of fragments back onto the Giotto’s fresco, broken to smithereens in the most recent infamous earthquake.

Time and money have prevented me from going to Italy lately, not my advancing age! I would love to go back to Rome, Florence, and Assisi for a “Last Hurrah”!