Ciao a tutti! First of all thank you so much for your well wishes and congratulations. It is so wonderful to be here, what a blessing. Here is a little account of my first day here…

We touched down to Roma Fiumicino at 10.30am this morning. 73 degrees and a blue sky – as blue as the Californian ones. Holiday-makers crowded onto the airport shuttle, chattering excitedly about their impending adventures.

Walking through security, and spotted the ‘Francesco Ways’ t-shirts and was greeted by Esilia and a British writer, Daniel. Then we were guided through and met with the rest of the group. There was a crowd of people of all ages, from all over the world: journalists, bloggers, editors, freelancers and photographers. With each shake of the hand was a new story: ‘I’m Gia, I’m a writer from New Zealand.’ ‘I’m John. I have my own travel TV show in the States.’ Everyone was full of energy and smiles.

We separated off into our groups and I went over to meet my co-pilgrims for the week. We are in the Le Marche group and we will be walking in the Marche region of Italy.

There are ten of us and we are from all different corners of the globe. Collectively we represent seven different nations, coming as far as New Zealand and China.

There’s Gia from New Zealand – she works for The Herald national newspaper. Almar from the Netherlands – a freelancer and businessman. Patrizia is Brazilian but lives in Sicily and works for her own Italian travel business. Lana is a Russian student and writes for a Russian magazine. Ali, from Beijing is an editor for a Chinese inflight magazine and finally there is a German lady from Berlin. I don’t know her name yet as she was sitting at the front of the bus! 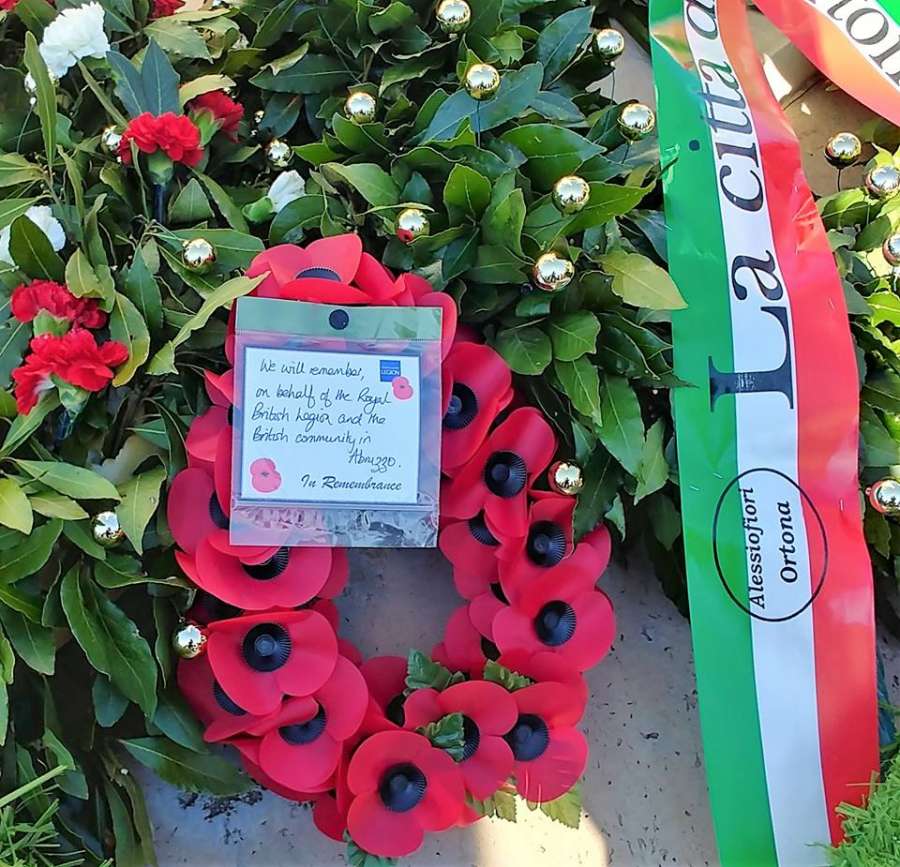 Co-pilgrims on their way

After introducing ourselves, we got chatting and walked to our bus. I got talking to the east-coasters in our group, Lauryl and John who flew from New York. Lauryl has taken the Franciscan vow of simplicity very seriously by not bringing any luggage with her at all.  The catch is – this was not planned. Her bag never turned up and is still in New York!  She is a hero and has remained calm and collected nonetheless. 10 hours later and there is still no news, but we’ve donated t-shirts to her, and are hoping the bag turns up soon.

Off we went on our way. We had a 4-hour-drive ahead of us. We travelled through Abruzzo – past il Gran Sasso – the highest part of the Apennine mountains. It includes three peaks, the highest of them is mount Corno Grande (the Big Horn), the height of which is 2912 meters above sea level.. The views were spectacular – gigantic and lusciously green forests and mountains, with tiny houses surrounded by the amazing splendor of the outdoors. There is a videographer on the trip, an Italian by the name of Marco who became our guide on the bus. He is from L’Aquila, we asked him about the 2012 earthquake. His home is just 5 minutes from the centro-storico, which was tragically affected. He was at home when it hit, but luckily his house was okay being a modern structure, did not take on substantial damage. We actually passed the town of L’Aquila – and he pointed out the many, many cranes that signified the reconstruction of the centro storico that was so badly shaken.

I fell asleep for a while, when I woke up with stunning views over the Adriatic sea through my coach window – a beautiful sight. The sea followed us all the way to the town of Loreto. 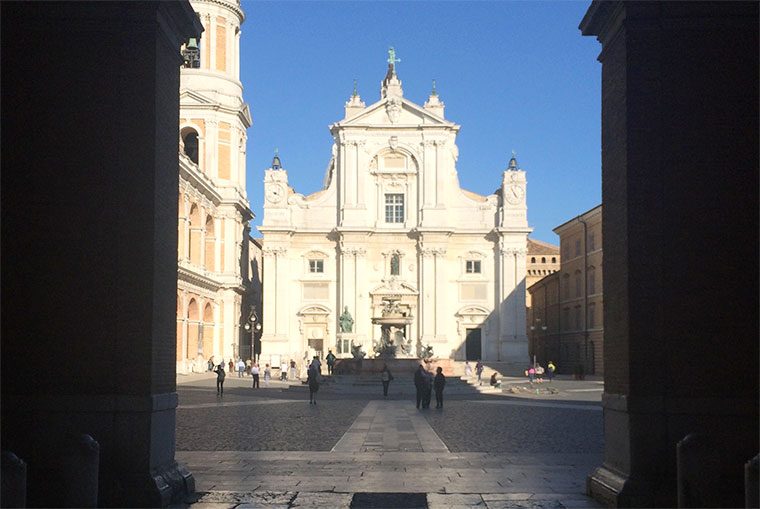 In Loreto, Father Paolo greeted us and welcomed us into the holy house of the Basilica. There was the smell of candle wax and the calming sounds of the priest saying mass outside. The rettore of the Basilica blessed us with holy water before our journey ahead and filled us in on an important notion related to our spiritual journey: Mary was the first pilgrim – telling her cousin Elizabeth about Jesus. That God would bless us on our journey ahead. I was handed the pilgrim stick – a sign of the journey as the prayer was said. 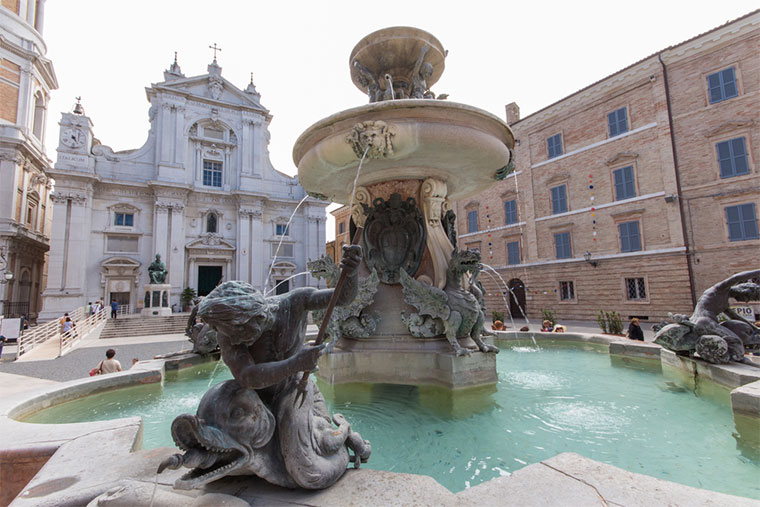 We were there given a tour of the Basilica and told the story behind the Santa Casa.  It is said that stones in this house, are the very stones from the holy house in Nazareth. Legend has it that angels carried the stones from Mary’s house to Loreto, but another tradition says the merchant Nicéforo Angelo of the 13th century carried them over. The guide showed us the Aramaic and Greek writings, which have been found on the stones, which prove the stone’s origin. 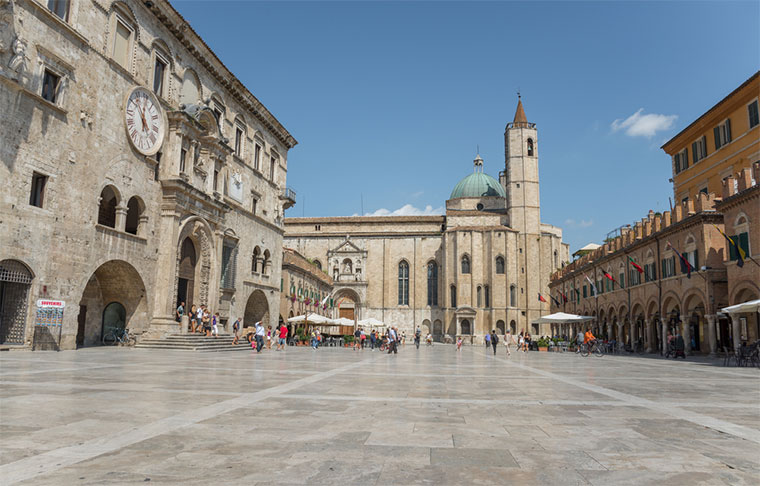 Piazza del Popolo. It is a popular square in the Renaissance style of the city of Ascoli Piceno — Photo by jacklondon

We head onto Ascoli Piceno and arrived at 7.30pm. The hotel we are staying is ornate with marble stairs and gold balustrades; it reflects the same beauty of the main square – the Piazza del Popolo.

For dinner we tried an array of local delicacies. Greeted by warm handshakes, we are led into the heart of the rustic restaurant. Sitting on wicked seats, we start with homemade bread and homemade olive oil. Then we are brought local wine to sip on, before our appetizers arrive. We try a beautiful white wine called passerina and a red one, rosso piceno, which comes from Acqua Viva – a small village close by. The red wine is light yet full of flavor.

The antipasti are marvelous – the stars of the show are the Olive Ascolane: stuffed local olives with mince and gently fried. A truly incomparable delight of the Marche region and Ascoli Piceno. We dine on fresh pasta, and are brought more wine – this time campo fiorito – a larger bodied wine from the Marche region. It’s heaven. Finishing our meals with a chocolate torta and coffee we head out into the square for a guided night tour of this stunning town.

Ascoli is older than Rome itself and it is literally bursting with history. It was founded a century before the Eternal City by the Sabini, an ancient Italic people which inhabited this part of the Bel Paese. Before we even set our eyes upon the town’s main square, the guide warns us: ‘Are you ready to see the most beautiful piazza in the whole of Italy?’. And she is absolutely right, because the view from here is stunning. A vast expanse of what looks like pure marble looks out onto the Chiesa di San Francesco, where we will be departing from tomorrow. But this place has also some secrets that lie hidden beneath your feet: for example, the remains of a Roman market that the archaeologists discovered just some meters below. Once again, our guide reveals herself to be really full of knowledge: she tells us that in Roman times birds represented people’s souls, so that the frequent depiction of St Francis standing among the birds represents in fact the Saint talking to people’s souls.

There is something very bonding about this experience already. Heading off together, being on the same cammino with the same end in sight – we are sharing this journey together, and that feeling is very tangible.

In the end, it has been a fantastic day. Ascoli Piceno and Loreto are amazing places.