It’s no surprise that vegetables are the bedrock of the Italian diet. For one thing, the climate is temperate and the growing seasons are blessedly long. For another, there is a relationship between the Italians and their vegetables that can only be described as sacred. This is in no small part because until relatively modern times, meat eating was a privilege of the wealthy. The country was slow to industrialize and kept much of the labor force under an essentially feudal system: Sharecroppers worked the fields on estates whose wealthy owners paid them not in cash but in kind—half the crop. Through those dark times, the Italians developed a love for the land and its produce that is still strong. To this day, they like to eat new peas in June and wild mushrooms in October. They recognize such things as gifts from God and accord them almost religious veneration.
My family was no exception. My father loved his vegetables. He laid down a household rule that my mother couldn’t buy them canned or frozen, certainly an anomaly in 1950s and 1960s when I was growing up. His love of dandelions, the bitter greens of his childhood, is legendary (I still think of him, laying sprawled on his back on our big lawn, chewing on their leaves and waxing poetic about how far he had come since his humble beginnings as the son of Apulian tenant farmers at the turn of 20th century). In any case, the supermarket offerings in the American hamlet of my childhood couldn’t satisfy my mother, who was used to shopping for vegetables in the overflowing stalls of Rome’s radiant street markets before marrying and coming to America. So our family planted a vegetable garden every spring.
Since then, my life has been filled with gardens and I wouldn’t have it any other way, no matter what the constraints on my time or space might impose. As the years have gone by and the houses I have lived in have gotten smaller, so have my gardens. Today, I tend a little patch of organic dirt no larger than a parking space behind my house in the center of town.
Of the few indispensable vegetables I grow, it is the green beans that I anticipate the most. This is because I have never succeeded in buying good green beans from a supermarket or a greengrocer, places where specimens are sold weeks after they have been severed from their umbilical vines in some faraway place before being shipped halfway around the world, sapped of any life. They should be picked while they are still young, before the seeds begin to bulge in their pods, and eaten within a few days of their harvesting. If you have a farmers market nearby, ask whether their beans have been picked that morning. “Same day-picked” should apply to green beans as much as to corn.
As for cooking them, like the Italians, I like my vegetables, green beans included, tender and sweet, not crunchy. This is accomplished only by boiling them in salted water to cover, not steaming them, as is the fashion here. You need only compare the taste of a steamed green bean with a properly boiled one as proof that cooking past the crunch point, but just before the beans become too soft, delivers their best flavor. Many people complain that no matter how long they cook supermarket-variety green beans, they remain tough. Such old beans deserve a resting place in the compost bin, not a workout in the cooking pot.
My favorite green beans are the flat and stringless fagioli corallo, variously called Romano, Rampicante, or Marconi, which can grow up to ten inches and still remain tender. This meaty variety is easy to grow and no other snap bean compares to its flavor. But whether you buy green beans freshly picked from a farmer or you grow your own, make them the way the Italians do, still hot from the colander, anointed with the best extra-virgin olive oil and, if you like, a memory of fine sea salt. They are a revelation.
Garden Green Beans, Italian Style
A side dish servings for 4 people
•1-1/2 pounds freshly picked green beans
•kosher salt
•best quality extra-virgin olive oil
•fine sea salt
Snip the umbilical tips (leaving the pointed ends intact). Fill an ample pot with enough cold water to generously cover the beans. Bring the water to a rolling boil. Add 2 tablespoons kosher salt. Cook them over high heat until there is no crunch left but they are not overcooked, 9 minutes for Romano beans or a minute less for smaller types. Drain at once, transfer to a serving bowl, and dress with the olive oil. Sprinkle lightly with sea salt at the table, if you like.
Variation: Coddle them briefly, once cooked, in extra-virgin olive oil into which you have first dissolved a few drained anchovy filets (preserved under oil) over medium-low heat.
Julia della Croce is a food writer and James Beard award-winning cookbook author and recipe developer based in New York. She is presently incubating a book about her family’s ancestral region, Sardegna. Visit her website, www.juliadellacroce.com and blog, http://juliadellacroce.com/forktales1/, connect on Facebook: Julia della Croce – chef & foodwriter, Twitter: @juliadellacroce and Instagram: juliadellacroce.
Receive more stories like this in your inbox 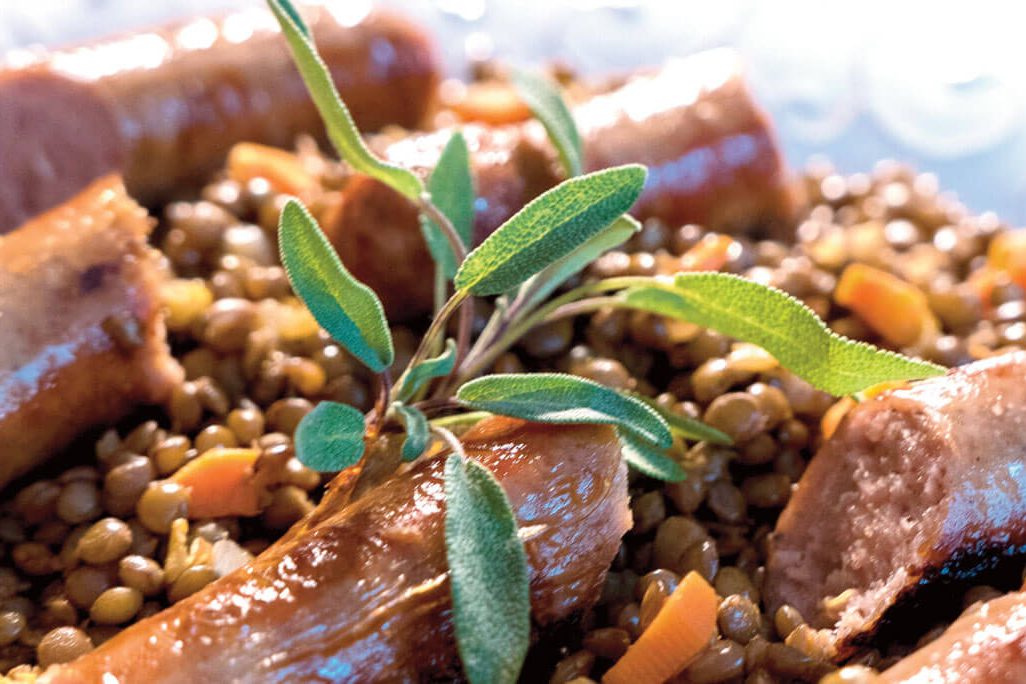 Food
For New Year’s: Lentils For Luck and Pork For ... 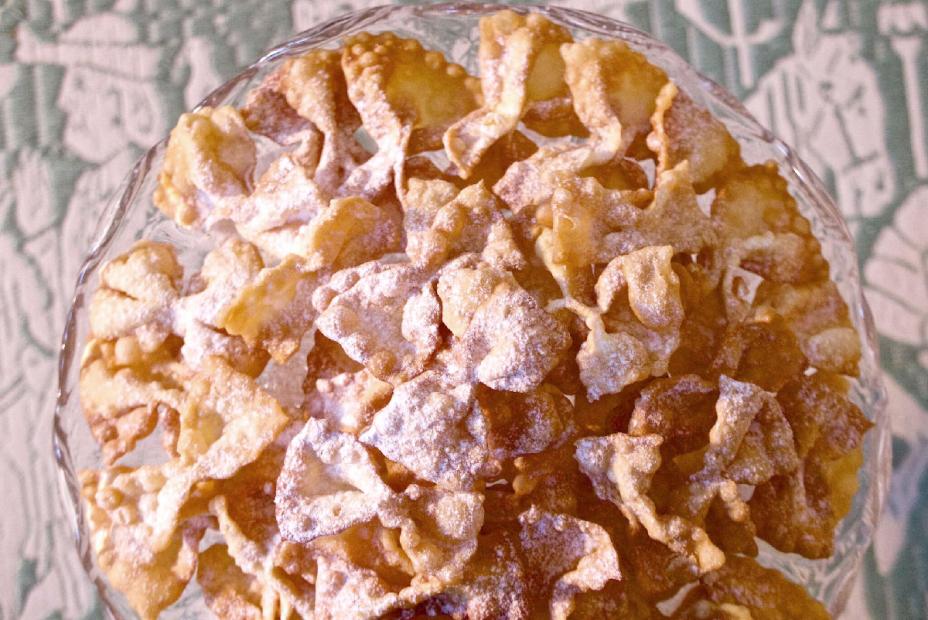 Food
For Christmas: Angels’ Wings On A Platter 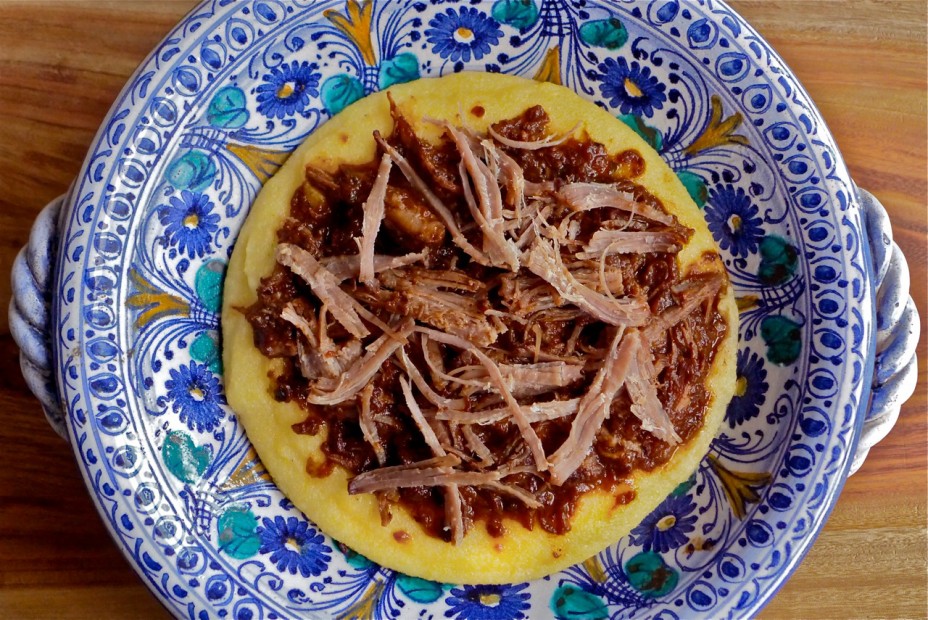