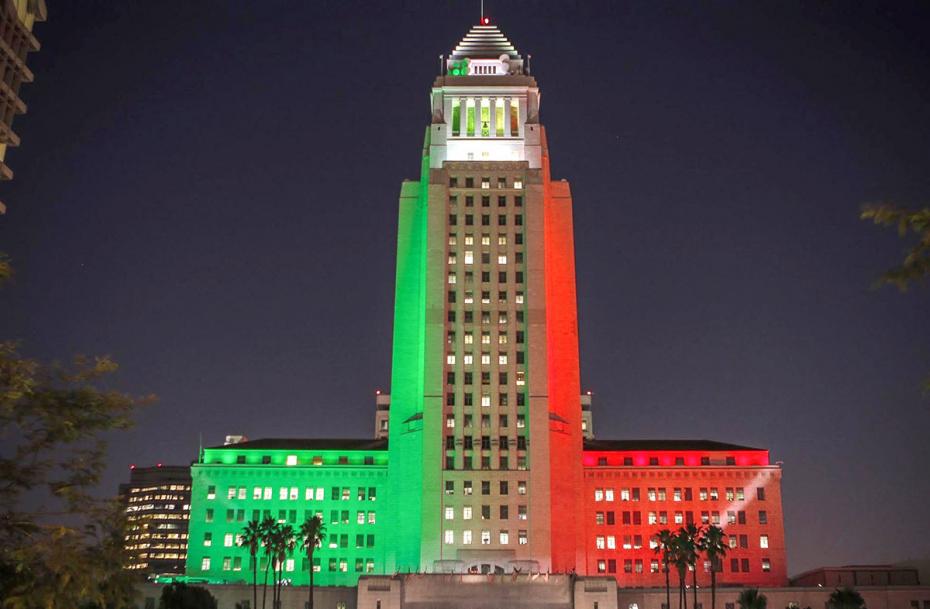 On Monday August 29th, Mayor Eric Garcetti, Councilman Joe Buscaino and Italian Consul General Antonio Verde, together with the Los Angeles Italo-American community, organized a candlelight vigil on the steps of City Hall to pay tribute to the victims of the recent earthquake in central Italy and raise awareness for relief efforts.
“The thoughts and prayers of everyone in Los Angeles are with the Italian people. We have a strong and historic bond with them, and are all-too-familiar with the enormously difficult aftermath of a major earthquake,” stated Mayor Eric Garcetti on his official Facebook page, “Lighting City Hall in the colors of their nation’s flag tonight is a symbol of our commitment to stand with them in a time of sorrow, loss, and recovery.” 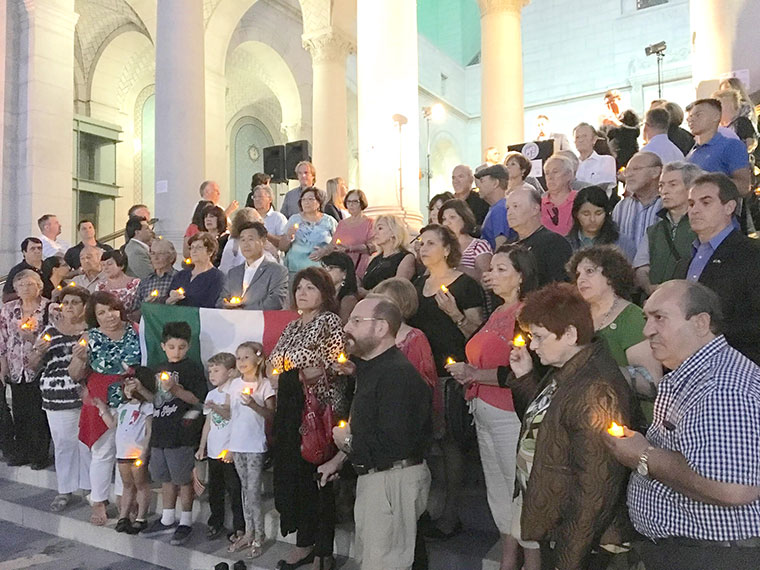 An earthquake, measuring 6.2 on the moment magnitude scale, hit Central Italy on the 24th of August at 3:36 am.  Its epicenter was close to Accumoli, with its hypocenter approximately 47 miles southeast of Perugia and 28 miles north of L’Aquila, in an area near the borders of the Umbria, Lazio, Abruzzo and Marche regions.
“The earthquake that shook central Italy on August 24th and that continues to rock that entire region with almost twenty five hundred aftershocks in these past five days certainly fits the description of ‘worst event’, as it is one of the most horrible natural disasters to strike our country with widespread destruction and a death toll that is steadily climbing,” Consul General Antonio Verde shared with the crowd gathered on the steps of City Hall, “This is something with which Californians can truly empathize, no matter the distance.”
To date, at least 292 people have been killed and dozens more are missing, the heaviest death toll being in Amatrice, a picturesque Italian mountain town and home to the beloved “Spaghetti all’Amatriciana” food festival. Amatriciana, a traditional Italian pasta sauce based on guanciale (cured pork cheek), pecorino cheese and tomato is one of the best known pasta sauces in Roman and Italian cuisine. In honor of this signature dish, many Italian restaurants nationwide have already begun earthquake fundraising efforts by offering their own spaghetti all’amatriciana specials to their patrons.
Joining forces locally to help their Italian brothers and sisters in need as they did in 2009 after the L’Aquila earthquake, the Federated Italo-Americans, an umbrella organization uniting over 130 Italian heritage organizations in Southern California, are also calling upon each other to begin various earthquake fundraising efforts. “Since they have been the first point of contact for survivors during this disaster, urgent priority is to support the Italian Red Cross,” explains Federated President Ann Potenza, “Once we know what is needed, additional funds will be raised to assist with their rebuilding efforts.”
Originally from Bari, Italy and attending the vigil with her husband Pasquale, Maria Bruno, President of San Padre Pio Society at St. Peter’s Italian Church could not hold back tears as she reflected on the tragedy in her homeland, “This is very hard for us, but our heart is with Italy.” A similar sentiment expressed by others in attendance.
Surrounded on the City Hall steps by his Italian-born parents and the many Italians who live in his San Pedro district, Councilman Joe Buscaino led the candlelight vigil with gentle demeanor, yet somber words, “We must allow this Italian tragedy to serve as a sobering reminder for Angelenos about the realities of living in an earthquake zone. Earthquakes the size of the Italy quake occur several times a month around the world – so they are not rare events. In fact, there have been over fifty large earthquakes around the world this year alone! This Italian earthquake reminds us that even nations with sophisticated disaster preparedness and world-class building codes need to realize that much more work remains to be done. I would also like to remind everyone here and those watching that the best way to help the Italian victims is to donate to the Italian Red Cross, Save the Children and the Italian Relief Fund.”
As the evening drew to a close with a final prayer from Monsignor Antonio Cacciapuoti of St. Bede’s Church, the glow of green, white and red lights on City Hall surrounded the community as a temporary blanket of comfort as they raised their candles up to the sky in remembrance of the victims.  Dio benedica l’Italia!
Receive more stories like this in your inbox 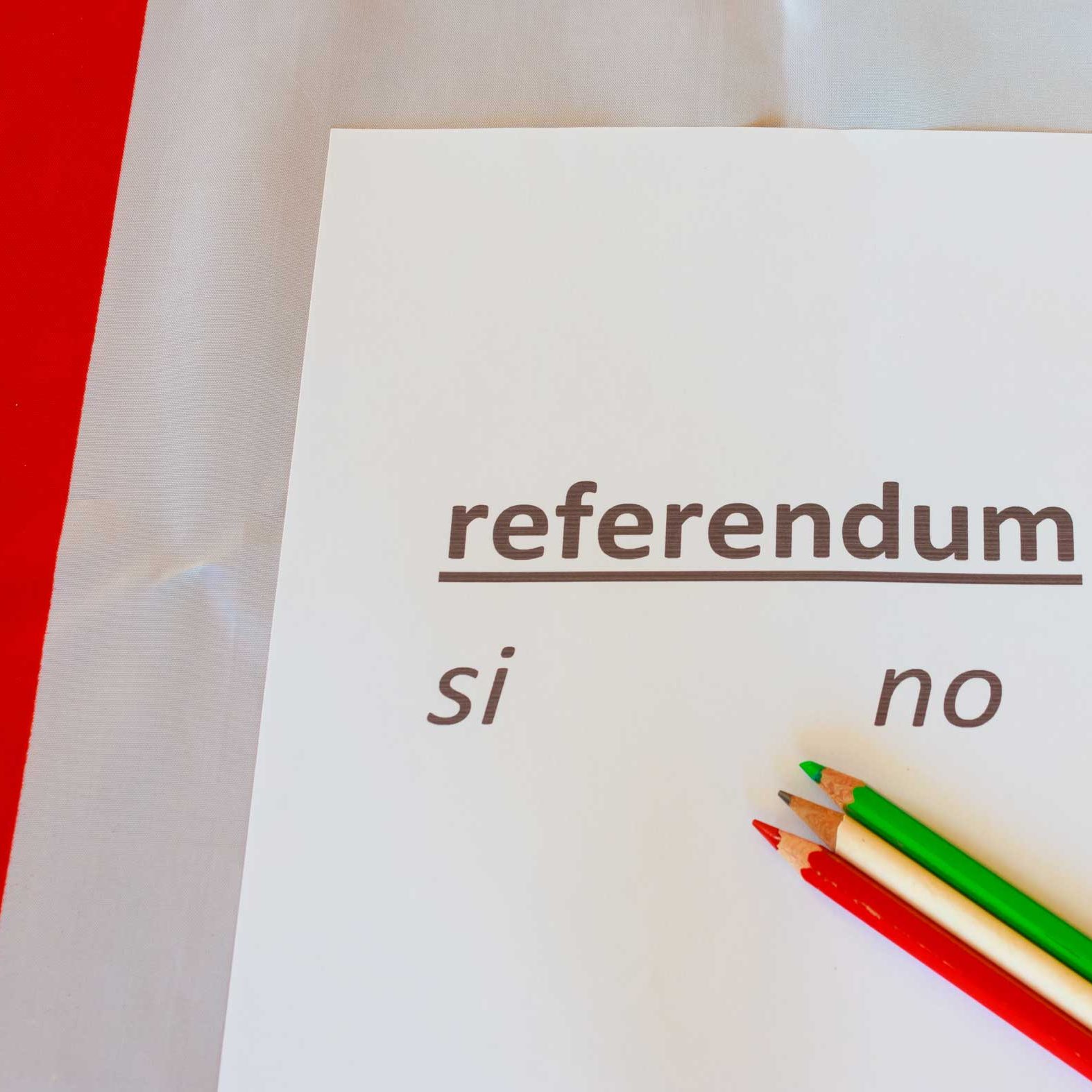